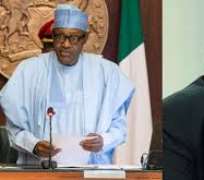 Few days after President Muhammadu Buhari without any shred of cogent and verifiable reason, dissolved the panel for recovery of public property, a leading pro-democracy and civil Rights advocacy group – HUMAN RIGHTS WRITERS ASSOCIATION OF NIGERIA (HURIWA) has accused the government of a “big cover up”.

HURIWA has also stated that the action of the government in hurriedly dissolving the panel only when there are allegations and counter accusations about the philosophy behind setting up the panel only goes to justify the groundswell of suspicions in and outside government quarters that it was not set up for any altruistic but rather ulterior motives and to carry out a widespread agenda against specific targets that are not in the good books of President Muhammadu Buhari and his unelected but influential Cabal.

The Rights group is of the position that the dissolution coming within weeks after the chairman of the panel Mr. Obono Obla was suspended following his investigation by the Independent Corrupt Practices And Related Offences Commission (ICPC) for alleged fraud, looks like a subtle validation of the claims made by the embattled suspended boss of the then property recovery panel whereby he accused the vice president Professor Yemi Osinbanjo of undermining the work of the panel for selfish reasons.

Speaking through the National Coordinator Comrade Emmanuel Onwubiko and the National Media Affairs Director Miss. Zainab Yusuf, HURIWA berated the government for the dissolution of the property recovery panel even when it has failed to transparently investigate all the allegations and counter allegations trailing the suspension of the then chairman Mr. Obono Obla, nor did the government respect the statutory provisions of the Freedom of Information Act on full disclosure by failing to inform Nigerians in black and white why it has to unceremoniously dissolve the special presidential investigation panel even when the same government elaborately celebrated the suspension of the chairman of the panel who in any event had made earth shaking revelations on how the number two citizen of Nigeria allegedly abused his power to undermine the implementation of the assignment of the now dissolved panel.

“We think that sweeping all the allegations under the carpets amounts to elevating impunity as the official mantra of this administration even as we do not see any sensitive, rational and sound argument for the dissolution of the panel which should have been allowed to operate if the intention of the presidency in setting it up in the first place was genuine and legally permissible."

"Why throw the baby with the bad water? Is the government then conceding that indeed the panel was set up to carry out politically motivated witch-hunt against members of the opposition party but quickly dissolved it when it went after beloved family members of the powerful cabal? Is the government conceding that it is guilty of exercising poor judgment in setting up the panel ab initio and authorising the spending of humongous public fund to carry out the operations? If the central government is saying it does not trust the integrity of the panel anymore, why has it not publicly disclose the quantum of cash that went into sponsoring the panel and also transparently disclose to Nigerians the extent of recoveries made or is the government saying that a panel it set up ended up as a cesspool of inefficiency and a money guzzling machine? Why not let the panel run even if there is reasons to make personnel changes since there are competent persons within the same panel that could have been made in charge of the Presidential panel?”

HURIWA statedthus: " We haven't forgotten that the suspended Chairman of the Special Presidential Investigation Panel on the Recovery of Public Property, Okoi Obono-Obla, said the planned investigation by the Independent Corrupt Practices and other related offences Commission would not be fair due to the closeness of the commission’s Chairman, Prof Bolaji Owansanoye, to Vice-President Yemi Osinbajo. As committed patriots and human rights practitioners, we took special note that he Mr.Obono-Obla stated that his job fa ed executive interferences from the vice president in a suit he filed on Tuesday to challenge the said probe for alleged certificate forgery and extortion and we also know that among other things, he contended in the suit marked, HC/ABJ/CS/980/2019, that the ICPC, had no powers to invite, arrest, detain, investigate, or prosecute him in connection with alleged falsification of academic certificates."

"We know based on public knowledge that through his lawyer, Mr Faruk Khamagam, Obono-Obla also filed an ex parte application seeking an urgent hearing of the suit just as the head of the legal unit of the SPIP while Obono-Obla held sway as the panel’s Chairman, Dr Celsus Ukpong, deposed to the affidavit filed in support of the main suit and the ex parte application.

"Nigerians were told that with Owasanoye as the ICPC chairman, the anti-corruption agency would not conduct a fair probe of his case just as he Obono-Obla linked his travails to the investigations he launched against influential persons and organizations."

HURIWA however regrettably recall that President Muhammadu Buhari dissolved the Special Presidential Investigation Panel for the Recovery of Public Property (SPIP) as currently constituted with Mr. Okoi Obono-Obla as Chairman just as the the Attorney-General of the Federation and Minister of Justice has been directed to immediately take over all outstanding investigations and other activities of the SPIP.

The Rights group said this information was contained in a statement issued recently by the Special Adviser on Media and publicity, Chief Femi Adesina.

HURIWA recalled that the panel was established in August 2017 by the then Acting President, Prof. Yemi Osinbajo, SAN to investigate specifically mandated cases of corruption, abuse of office and similar offences by public officers.

HURIWA has however maintained that government would be taken Nigerians for a ride should the President fail to explain to Nigerians in greater details the fuller reasons for the dissolution of the Panel and also conduct independent investigation into all the allegations.