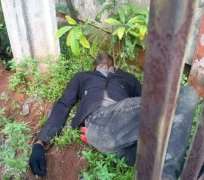 A man who specialized in vandalizing transformers belonging the Benin Electricity Distribution Company (BEDC) has been electricuted to death in Asaba, Delta State capital.

The man whom luck ran out on, our correspodent reliably gathered is a father of three.

He was found dead by residents after his failed attempt to steal some of the facilities over the weekend sent him to his early grave.

The incident occurred along the High Court road area of Asaba.

His remains were discovered on Monday morning by residents as he allegedly broke into the facility on Sunday night.

The middle-aged man was alleged to have been retrenched from one of the electricity distribution companies, and had been involved in unskilled job before the incident took place.

The lifeless body of the deceased was lying inside the building housing the transformer.

His remains were later evacuated by police in the area Monday afternoon.

“The deceased vandal was until his death a husband and father of three children, who engaged in unskilled labour to cater for his family. His corpse was discovered on Monday morning some residents”, one of the sources added.