Offer Automatic Employment After Completion of Studies to him
By Sadiq Abubakar, The Nigerian Voice, Maiduguri 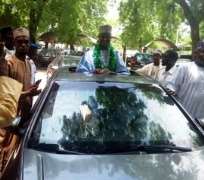 The Borno State Governor, Professor Babagana Umara Zulum while receiving delegation of Borno State Council for Qura'nic Education to present Idris Abubakar Mohammed, the winner of King Abdulazeez international Qur'anic competition who is also an indigene of Marte LGA of Borno state that was recently held in Saudi Arabia.

Governor Zulum in his address congratulated the winner, Sheikh Idris and approved a scholarship for him up to a PhD level and automatic employment after completing his studies.

The governor also announced that his administration would establish Higher Islamic Schools across all the 27 Local Government Areas of the state.

He further stated that his administration would not hesitate to offer similar gesture to any citizen of Borno, who distinguish himself and made the state proud irrespective of political, religious or tribal difference.

"The State Council for Qura'nic Education, which was established in 1986 among other things is charged with the responsibility of organizing Qura'nic recitation competition in the state.

Sheik Idris, an IDP who hails from Marte Local Government Area of Borno State and is currently residing at Al Miskin IDPs Camp along Gongulong road in Old Maiduguri.

Highlight of the occasion was the recitation of verses from the Holy Qur'an by the Shiekh Idris Abubakar Mohammed, presentation of five million naira cash and brand new Toyota Corolla by Gov. Zulum to Shiekh Idris.