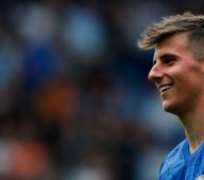 Mason Mount feels Chelsea need to turn Stamford Bridge into a fortress as Frank Lampard's wait for a first home win as manager drags on.

A 2-1 defeat by Premier League leaders Liverpool on Sunday means Lampard has yet to taste victory on home soil in four matches since he replaced Maurizio Sarri at the helm in the summer.

Sloppy defending from set-pieces provided Liverpool with both goals, with only Norwich and Watford having conceded more goals than Chelsea in the opening six matches.

Mount believes Chelsea went toe-to-toe with Liverpool in open play, but stressed the importance of improving the defending from set-pieces in the quest for a first home win of the season.

“Of course [we need to win more at home], if you look at the games we have had we can take positives from every game we have had,” Mount said with Chelsea facing home games against Grimsby Town in the Carabao Cup and Brighton in the Premier League this week. “We need to win games at home, that's a big focus.

“We are doing well away and now the focus is building that fortress at home and, when teams come here, they know it will be a tough game. We showed that in the second half. They are one of the best teams in the league and, in the second half, I felt like we dominated it.

“They had chances. Look at the team they have got and they are always going to create chances, but I thought overall in the second half we were very dominant. We had chances of our own and we could have scored. We look back at the second-half performance and take a lot of positives from it.

“I think Liverpool are a very, very good side and they started the game well from two set-pieces which you can't do very much from that with their quality. I thought they didn't create much in open play.

Roberto Firmino Chelsea vs Liverpool 2019-20
Roberto Firmino Chelsea vs Liverpool 2019-20
“So, I think we just need to be concentrated when the ball goes out of play so we are switched on and ready for anything to happen. It is set-pieces that are causing some trouble. They scored two and, when you go 2-0 down, then it is quite tough to get back into the game.

“I thought we were at the end but, if you switch off at set-pieces at this level, then you get punished. It happened twice so that's something we will look at and we have been looking at. We need to keep working on it.

“We are positive straight after the game, focusing now on our next two games, at home and wanting to win them. They are difficult games, but I think once you get that first home win and get that momentum building, then hopefully we can carry that on.

“I think the fans watching saw how much we put into the game. How hard we worked throughout the whole game. They probably feel as much as us that we could probably get something from the game at the end.

“It could easily have been a draw if we nick a goal so, they are watching the game and can see how much we are running, and want to win the game and want to play for the badge, so, yeah, that home win is due and we need to focus on that and hopefully in the next game we can do that.”