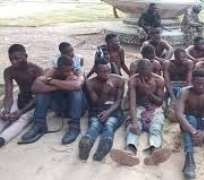 The dismissed soldiers were among the 28 suspected members of the Neo Black Movement for Africa cultist group arrested by the police in collaboration with the military, NSCDC, DSS, hunters and other security operatives.

Parading and handing over the dismissed solders to the Police at the headquarters of the Operation Lafiya Dole Sunday evening, the theater Commander Operation Lafiya Dole. Major General Olusegun Adeniyi said “the group are armed robbers and kidnapers parading themselves as cultists”

He said ” they were arrested with the help of hunters, police, military and other security operatives in Bagani Hotel in Filing Station area of Abuja Sheraton International Hotel Maiduguri, Biu road , near Tashan Kano Motor Park Maddaganari Area, Maiduguri.

"These 3 solders were caught doing evil. We in the Nigerian Army does not do evil. They were subjected to military procedure and were dismissed. We are gather here today to witness their handing over to the police for prosecution”

” No evil should be allow ed to serve in the military, one of the suspects run away with matcheted wound on his head. I call on the general pubic to be conscious of their environment.

"If they see anybody with matcheted wound, they should report to any security outfit nearest to them because they pose a great danger to the society,” Adeniyi said.