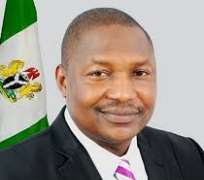 Justice Minister, Mr Abubakar Malami; the Inspector-General of Police, Mohammed Adamu, and the Governor of Central Bank of Nigeria, Godwin Emefiele, on Saturday led a delegation to the United Kingdom for the epic legal battle with a British firm, Process and Industrial Developments Ltd on Thursday.

Other government officials that were part of the trip included the Minister of Information and Culture, Lai Mohammed, and the acting Chairman of the Economic and Financial Crimes Commission, Ibrahim Magu, the PUNCH reported.

The delegation is aside from a legal team that has also left for London, ahead of the court case on Thursday.

A British commercial court had in August affirmed the ruling of a London arbitration tribunal, which, in January 2017, awarded $6.6bn arbitral award against Nigeria over an alleged breach of a gas supply and processing agreement signed with P&ID.

The tribunal had ruled that Nigeria was liable for $6.6bn in damages, which increased to about $9.6bn with accruing interest.

Minister of Finance, Budget and National Planning, Zainab Ahmed, on August 26, described the judgment as an assault on all Nigerians

She had said it was important for all Nigerians to rise up to the task of ensuring that the nation and its citizens were not unfairly treated on the matter.

The minister had said, “This matter that has brought us here today is a very weighty one. An award of $9.6bn is equivalent to N3.5trn. N3.5trn in our annual budget will be covering for us the personnel cost, which is about N3.2trn and more. So, this award is unreasonable, excessive and exorbitant.”

On Thursday, the British firm will return to the court to make a final push for the seizure of $9.6bn Nigerian assets, wherever they may be in the world.