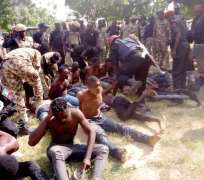 Members of a notorious gang of suspected cultists who practice armed robberies and abductions were about to commence the initiation of new members into their confraternity when they were bursted and arrested in the early hours of Sunday, 22 September, 2019 by the swift response of troops of Nigerian Army Super Camp 1 Molai of Operation Lafiya Dole in conjunction with other security agencies in Maiduguri, Borno State. Attempts to escape arrest by the violent group was well frustrated by security agencies .

Colonel Ado Isa, the DDAPR, Operation Lafiya Dole , Theater Command Headquarters Maimalari Cantonment Maiduguri Sunday in statement said the arrest was based on credible information made available to the troops by the local hunters near Molai and Abuja general area of Maiduguri.

According to the information, it was revealed that members of the cult group have concluded plans on next operations and were about to commence the initiation rites of new members into their cult group.

On receiving the information, troops of Nigerian Army Super Camp 1 (NASC 1) along with other security agencies were quickly mobilised for the operation. The general area was cordoned and 18 members of the cult group comprising civilians and suspected students of the university of Maiduguri were arrested at the scene including 3 serving personnel of the Nigerian Army.

He added that the general area was cleared by the security forces to ensure there are no such activity going on concurrently in the area. The Theatre Commander (TC) Operation Lafiya Dole, Major General Olusegun Gabriel Adeniyi, the General Officer Commanding (GOC) 7 Division Nigerian Army, Brigadier General Abdul Khalifa Ibrahim, Commissioner of Police, Director State Security Service as well as heads of security agencies in Borno State were all present at the scene for on the spot assessment and inspection of the general area.

According to him, the suspected intensive joint patrol by troops of Operation Lafiya Dole and other security agencies currently within the Maiduguri Metropolitan Council and environs is to clear all criminal elements and cultists.

"While we continue to intensify the fight against insurgency, Criminals, Bandits as well as Cultists will be monitored and arrested.

Members of the general public are therefore advised to continue with their normal daily activities and businesses.

The public are advised to provide credible and reliable information on the activities of suspicious groups and persons to the military and other security agencies in order to completely clear the city of all criminals and criminality.

" We remind the public to also be on the watch out for fleeing terrorists from the lake Chad General area", Isa said.