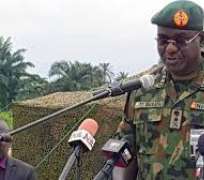 A prominent pro-democracy and civil Rights advocacy group- HUMAN RIGHTS WRITERS ASSOCIATION OF NIGERIA (HURIWA) has charged the Speaker of the Federal House of Representatives Mr. Femi Gbajabiamila to constructively work out ways and means of positively partnering with the nation's military and avoid undue political bickering and distraction so the counter terror war is effectively won in no time.

HURIWA however praised the Senate's leadership for showing understanding and maturity in seeing to it that the military is supported in a lawful manner to continuously wage a determined, resilient and result oriented war on terror which most Nigerians are hoping that sooner rather than later Nigeria will witness absolute decimation, degradation and defeat of all boko Haram terrorists of all genres so the normal life of the good people of North East of Nigeria and all across Nigeria can once more thrive under lawful atmospheres.

HURIWA spoke against the backdrops of a statement from the office of the Speaker of the Federal parliament threatening to report the Service Chiefs to the President for failing to honour the House invitation to discuss the cases of widespread insecurity in Nigeria just as the Rights group said it was unnecessary to dramatize the situation giving that Nigeria is now at the tipping point of a highly charged and critical war on terror that threatens the continuous existence of Nigeria.

HURIWA said thus: "Unhealthy squabbles and media showmanship from political actors targeting military chiefs are big distractions which must be avoided at this material point in time because these are very unusual and abnormal times and during war times the entire leadership structures must bury the hatchet and superiority complexes so the central enemy of the Republic is dealth with decisively ".

HURIWA said that in as much as it supports the healthy coexistence of all segments of government and also in as much as it supports the adherence to the provisions of the Nigerian Constitution regarding the principles of checks and balances which gives the national parliament the power of constitutional oversight over all national institutions, but the Rights group cautioned against any political distraction and sensationalisation that could send the wrong signals to enemies of Nigeria and the terrorists that the leadership of Nigeria and the hierarchies of the nation's military are divided and therefore try to hit back at the territorial platform of Nigeria.

"Our very honest counsel is that the political leaders must explore out- of- media resolution of any emerging misunderstanding between the service Chiefs and the National Assembly especially at these times of our national trajectory which calls for all hands to be on deck to deliver, decisive, comprehensive and lasting victory of Nigeria over armed boko Haram terrorists once and for all so stability, national peace, harmony and economic growth can be witnessed in no time."

HURIWA stated also that the current Service Chiefs and most especially the Chief of Army Staff Lieutenant General Tukur Yusuf Buratai have untainted records of sound and healthy relations with the National Assembly in the past many years just as the Rights group expressed optimism that as leaders in their own right who have sworn to the Constitutional oath of office to sustain civil rule and constitutional democracy which they have repeatedly voiced out, it would be out of place to convey the erroneous idea that they have no respect for constituted democratically elected authority.

Relatedly, the Rights group- HUMAN RIGHTS WRITERS ASSOCIATION OF NIGERIA (HURIWA ) has expressed optimism that the Nigerian military will inevitably defeat terrorism and free the Country from the deadly stranglehold and threats posed by the activities of boko haram terrorists even as the Rights group has commended the military troops of the Nigerian Army on Operation Lafiya Dole and of the Multi-National Joint Task Force for successfully shooting dead of at least seven commanders of the Boko Haram insurgents in the Lake Chad region of Borno State, including the Islamic State trainer and a fighter from Mali.

HURIWA recalled that the army said on Friday that the commanders were gunned down through “combined efforts of artillery and air bombardments of their suspected hideouts,” while identifying the commanders as Abba Mainok, Bukar Dunokaube, Abu kololo, Abor Kime, said to be of Arab origin and ISIS trainer, Mann Chari, Dawoud Abdoulaye from Mali and Abu Hamza.

HURIWA quoted the media as stating that military media liaison director stated that the Chief of Army Staff, Lt Gen Tukur Buratai, has sent a message to the commanders of the MNJTF and Lafiya Dole, asking them to sustain the momentum which the Rights group described as motivational.

HURIWA has also asked the National Assembly and all institutional agencies to facilitate the adequate funding of the military institutions to professionally empower them to effectively discharge the Constitutional role of protecting the territorial integrity of Nigeria in line with the statutory provisions of the Supreme laws of Nigeria which are binding on all persons and authorities just as the Rights group urged the Chief of Army Staff to keep up the good work of running an open, transparent and accountable financial and procurement processes.

HURIWA said: "As one of the few credible civilian led Non Governmental organisations dedicated to partnering with the military to achieve holistic promotion and protection of human rights, the rule of law and professional excellence at all times, we are delighted to have read that the acting Director, Army Public Relations, Col Sagir Musa, in a release, said the MNJTF and the armed forces, in their combined efforts of artillery and air bombardments of suspected hideouts of Boko Haram and ISWAP fighters at the Tumbus of Lake Chad region, neutralised many including key commanders."

HURIWA is happy that the Army has assured the World that reliable information coming out from the inner circles of the armed terrorists , indicates that no fewer than seven key commanders were wasted by the superior forces of the MNJTF even as the credible body of evidence according to the military pointed to the fact that the neutralised commanders’ names may likely be nicknames. Nonetheless, efforts are ongoing to get more information on their true identities.