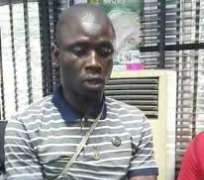 Suspected Port Harcourt serial killer Gracious David West has told the Nigerian police that he used pillowcases to tie a victim before killing her in a hotel room in Rukpokwu, about 18 kilometres from Port Harcourt, the Rivers State capital city.

26-year-old West, whom the police said is a cultist, was arrested on Wednesday on East-West Road en route to Uyo from Port Harcourt.

West said in a video the Nigerian police posted to its official Twitter handle he had transactional sex with a nameless victim. Hours later, the victim was killed.

“We went to the hotel,” West said in the confessional video. “I paid for the place. So they took her up [to the room].”

He said he ordered for food to be prepared for him and the victim after which they “slept,”, which seemed to be a euphemism for having sex.

The crime, he told the police, was committed in the early hours of the following morning.

“With that fear, she couldn’t shout. By then, the television…the volume was loud. So she kept quiet. After that, I used the wrapper to tie her hands at the back and then tie her legs.”

When asked by his interrogator, who was off the camera what sort wrapper he used, West said he did not use a wrapper but pillowcases.

“Investigation is on with a view to ascertaining his motives and possible accomplices,” police said on Thursday evening.

Before the Wednesday breakthrough, the police was criticised for its initial tepid handling of the series of identical killings in the state.

Women dressed black marched on the streets of Port Harcourt on Wednesday, asking the Rivers Government and security agencies to end the killings.

“We are here to make a demand because our sisters are being killed,” said Ibim Semenitari, a former commissioner in the state, who took part in the protest.

Photos shared on social media showed corpses of young women with pieces of clothes tied around their necks and legs. This, the police said, is an indication that killings may have been done for ritual purposes.

“There is an element of cultism in all the killings in the hotels that have taken place,” Rivers Police Commissioner, Mustapha Dandaura said.

“The serial killer normally drugs his victims and thereafter, he strangles them,” he added.

The police said eight persons have been killed in such a manner.