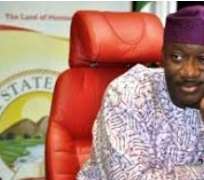 Tragedy struck at Odo-Ayedun Ekiti in Ikole Local government area of Ekiti state as a woman and her two children died after eating yam flour.

Two dogs in the house that ate from the food also died while the father of the late children is receiving treatment at the Federal Teaching Hospital Ido-Ekiti.

A member of Ekiti State House of Assembly representing Ikole constituency, Hon. Steven Aribasoye said the incident must be investigated.

Aribasoye said the yam flour which was brought home by the husband of the deceased and was ate as dinner.

He explained that after eating the meal, the mother and the two children complained of stomach ache before they died.

According to him, the remote cause of the incident is still unknown as members of the community are still in shock.

The lawmaker lamented the poor state of health facilities in the state.

The speaker of the Ekiti State House of Assembly Right Hon. Funminiyi Afuye sympathized with honourable Aribasoye and the entire people of his constituency over the tragic incident.

He directed the house committee on health to commence investigation into the matter.