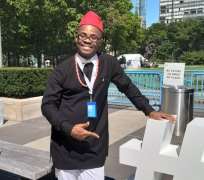 It is no longer news that an African will be the President of the 74th session of the United Nations General Assembly starting from Tuesday, 17th - 27th September 2017 in New York, chaired by H.E. Prof. Tijjani Muhammad Bande from Nigeria.

However, what is global news is that the United Nations Secretary-General has selected over 400 exceptional climate advocates based on their demonstrated global and national commitment to addressing the climate crisis and climate solutions. He has emerged as one of the rising global climate advocate and was one of the recipient of the Tripple A-Award given by African Trade Center, a continental investment and promotion agency in consultative status with the UN ECOSOC. The proUnited Nations High Level Political Forum on Sustainable Development (HLPFSD) which focused Diaspora Engagement in Sustainable Development in Africa held at the Permanent The event which was declared open by H.E. Amb. Ben Okoyen, the Consul-General of Nigeria had in attendance, Senator Robert Jackson, State Senator of New York, Her Excellency Hon. Gale Brewer, the President, Borough of Manhattan, the Representative of the Oni of Ife and many other high level officials and dignitaries.

with the International recognition.
for his concept idea of creating a mobile application that can help strengthen climate resilience to climate impact and extreme weather events.

His selection was greeted with a lot of praise all coming from members of his organization, Team54Project International , relatives , collaborative partners and friends.

The recipient of this first-ever UN Youth Climate Summit holding on Saturday, September 21 at UN Headquarters in New York , come from all over the globe.

Dr. Gbujie who is equally billed to speak at the Rose Garden in the UN Complex at an evening event during the UN Youth Summit, willing be taking on how best youths can take climate action and commitments to tackle the climate emergency. “ The Youth Climate Compact, is an important document we collective developed and thousands pledge to uphold as framework to take climate action at the 68th UN Civil Society Conference, in Salt Lake City Utah last month, I want to ensure that youths across the world get to know about it “ he said.

An excited Gbujie , said “I am grateful to the Secretary General of UN , and also want to sincerely appreciate the entire staff of the UN Department of Global communication and their Youth Representatives Steering Committee members for selecting me” He said.

Dr Gbujie will be joining more than 500 young climate leaders selected to participate in this historic Youth Summit at the UN. The Summit is expected to provide a platform for this emerging global climate leaders to showcase their solutions and engage directly with heads of government on the defining issue of our time which “climate change”.

They also will be presenting the discussions of the Youth Climate Summit at the larger UN Climate Action Summit on Monday, 23 September 2019.

Dr Gbujie said, “I am still in shock when I was informed few days ago but am eternally grateful to have been selected by the UN Secretary General, am so grateful that I am going to be part of the intergenerational dialogue happening during the UN General Assembly in few days, before then we all should be taking climate action in our respective region.” The United Nations Secretary-General António Guterres is convening this year Climate Action Conference to mobilize climate action so as to meet the goals of the 2015 Paris Accord.

All the Heads of States have all been invited to New York in September and are expected to bring with them concrete, realistic plans to enhance their nationally determined contributions by 2020, in line with reducing greenhouse gas emissions by 45 per cent over the next decade, and to net zero emissions by 2050.

The Summit will serve as a public platform for leaders – Member States, as well as finance, business, civil society and local leaders from public and private sectors – who are ready to transition to eco-friendly energy as generated by renewable energy and contribute to sustainable and resilient infrastructures and cities; sustainable agriculture and management of forests and oceans; resilience and adaptation to climate impacts; and alignment of public and private finance with a net zero economy.

UN Secretary-General António Guterres in a congratulatory video message appealled to youth around the world to follow the Summit online and to be drivers of climate action in their respective countries.

The Youth Climate Summit is a key milestone ahead of the Secretary-General’s Climate Action Summit, which is calling on leaders from government, business and civil society to boost efforts to tackle climate change and comes just one day after the Global Climate Strike on 20th September 2019

This Article’s Author; Mr. Covic Elsinore, he is an eco-journalist and an independent Television producer from Ecuador.