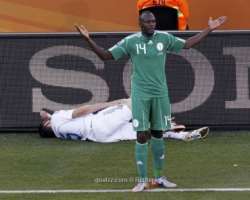 Nigeria midfielder Sani Kaita has received threats to his life after he was sent off in a crucial World Cup Group B match against Greece.

Kaita told The German Press Agency dpa on Saturday that he had received death threats, but said he was not bothered by them.

"Yes, I have received some threats to my life," he told dpa in a telephone call from the team hotel in Richard's Bay near Durban.

"They were sent to my email, but I'm not disturbed about that because as a Muslim, only God decides who lives and who dies."

Kaita was dismissed in the 33rd minute in his team's 2-1 defeat to Greece in Bloemfontein on Thursday after he appeared to lunge at defender Vasilis Torosidis with a foot during a tangle by the touchline.

"Everything on this earth is in God's hands, whether it is your life or whatever and unless God allows it, no one has the power to kill me," Kaita said.

"Only God knows what will happen tomorrow. He holds our destiny. That is what my religion teaches me."

Kaita refused to compare his situation with that of Colombia defender Andres Escobar, who was shot dead back home in Colombia in an incident believed linked to his his own goal which allowed hosts United States into the next round of the 1994 World Cup.

Colombia's failure to reach the knock-out stage of the World Cup was believed to have caused huge gambling losses to some of the country's powerful drug lords.

"I won't liken my case to that of Escobar because everyone has his destiny on this earth," Kaita said.

Kaita restated his personal disappointment with the red card incident which turned the match in favour of the Greeks, saying he was not even been booked in a Nigerian shirt before the drama in Bloemfontein.

"I can really understand the disappointment following what happened against Greece," he said.

"But I'm even more disappointed because since I began representing Nigeria at international level, first with the Under-20 team, then the Olympics and the full international team, I have not been booked much less sent off. This is not in my character.

"The coach (Lars Lagerback) told me he was disappointed in me soon after this match, but ever since both the coaches and players have rallied around me, offering me words of encouragement."

Kaita, 24, made his international debut in 2005 and has played at three African Cup of Nations tournament.

Despite Nigeria's defeats to Argentina and Greece, the Super Eagles will reach the last 16 if they defeat South Korea in their last Group B match in Durban on Tuesday.

Kaita, who is automatically suspended for that game, said he remained "very positive both as a person and also as part of the team."

He added: "Everyone's focus is on the next game and our prayer is that we win on Tuesday and qualify for the next round. I'm a Nigerian and proud to be one."