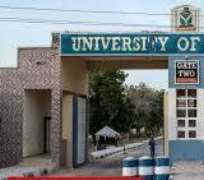 The authorities and students of University of Maiduguri said on Monday that Boko Haram terrorists did not stage any attack on the University campus on Sunday night as reported in some media.

According to them, the heavy gunshots, heard around 10.20 pm which scared some students out of the campus, came from behind the Dalori IDPs camp. The army, it was learnt, immediately responded and engaged the gunmen suspected to be boko haram terrorists for almost an hour of exchange of gun fire.

The Chief Security Officer of the university, Alhaji Isa Adam confirmed to newsmen on phone Sunday night that there was no Boko Haram attack on the campus.

He said that Governor Babagana Umara Zulum of Borno state also visited the university campus on Sunday night after the incident.

‘We are currently outside the campus on the road but with the military. The attack was actually behind the campus at the Dalori IDPs Camp area", Adamu said.

The CSO of the varsity insisted that it was behind the university campus not in the campus as speculated and reported by some media.

Similarly, a part three student of Economics department , faculty of Management Sciences, University of Maiduguri, Mohammed Goni Abatcha said", The echo of the gunshots was coming from the female hostel side not even the male hostel side ".

Governor Babagana Umara Zulum later visited the campus with additional troops to assure students there was no cause for panic.

Another student living off campus, Mary James in Agricultural Engineering said, ", some students were actually afraid and most of them assembled here on the road and the moment they saw the State Governor, Professor Babagana Umara Zulum and his entourage, they started shouting, “Zulum Yazo!!!”. The governor arrived with his entourage and met some students hanging around on the Bama road and by the gates sides and restored confidence to them.

Similarly, when the military arrived the university side and met students on the road hanging around, the students started cheering them for responding on time and to protect them from the gunshots they were hearing.