Devils in the neighborhood 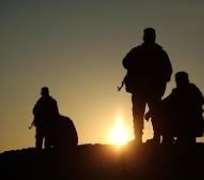 Violent crime, such as armed robbery, assault, carjacking, kidnapping, and rape is almost commonplace throughout the country. Most Travel Advisory would ask that one exercise extreme caution throughout the country due to the threat of indiscriminate violence. Terrorists continue plotting and carrying out attacks in Nigeria, especially in the Northeast.

Against this backdrop, myself and Barrister Madaki, and a client of his were jaw-jaw-ing about how unsafe our local communities have become unsafe, even my wife had recently commented, we have kids, so it is no surprise we are concerned.

The Kaduna-Abuja road has for long been a nightmarish experience, security concerns is no longer a here and there case but an everywhere matter. We are served pot pouri of the President is meeting with security chiefs, the state governors are donating cars to security apparatus, we are debating local vigilantes, community policing, state police and more but we are not getting it right.

Do you know where Belem is in the map of the world, have you been to Vitoria da Conquista or do you intend to go to Culiacan. A lot of us can only relate to St. Louis as a brand name for our favorite sugar pack, but it is actually a place and it is also a dangerous place, like Maceio and like Cape Town (we know this) and we also know Kingston, that sounds and certainly must be Jamaica, the weed and Marley town.

It is a long list that has San Salvador and Aracaju, Feira de Santana and Ciudad Juárez, and yes I know Baltimore (It is in the US) I have been there, really crazy place. Not sure I know a place called Recife, or Maturin and I do not know Guatemala City and Salvador, but the names are familiar.

So I have never heard San Pedro Sula but I know Valencia because I know of the soccer team from that city. Three paragraphs gone and I, like you cant but wonder what is this list about. The list that still has;

For all the mud thrown at us as Nigerians, two facts are at play; either no one really cares about Nigeria, or as usual we may just be ‘just’ so bad there are no records, I would settle for a safer but dangerous balance which is, we are on our way to getting to the list that has Mexico with 15 cities, Brazil with 14, South Africa with three and US with four and Venezuela with 6. Honduras and Colombia has two

While Puerto Rico, Jamaica, El Salvador and Gutemala have one each.

So Nigeria is an unsafe destination...Northern Nigeria is unsafe for foreigners (especially westerners) due to ethnic and religious tensions, lawlessness and the current activities of Islamist groups such as Boko Haram. This is likely to be the kind of thing you see thrown around about Nigeria. And you don’t want to know the real truth about criminal activities, and crime lords operating across Nigeria like Mr. Wadume of Taraba, but we are not on the LIST OF THE MOST DANGEROUS CITIES OF THE WORLD.

And in Esther Opaaje's words while, "The country is arguably one of the most visited destinations in Africa (more or less so depending on which international index you rely on). Lagos alone accommodates over 2,000 expats monthly. It is also estimated by the British Common Wealth Office that around 117,000 British nationals visit the country each year. Nigeria is a unique country, but also a country of extremes and home to some of the most educated and brightest minds in Africa. Although its polity has been deeply rotten by corruption, it is a country with undisputed international presence and attention. Extreme poverty co-exists side-by-side with stupendous wealth, but there has been apparent stability in the political terrain in the recent years."

According to a World Bank Report, poverty still remains significantly high at 33.1%, we are not just poor, but multidimensionally poor, comically put, our poverty has a surname. Nigeria is so rich and Nigerians are so poor!

In case you don not know by 2050 we may just overtake the USA in terms of population. We have crude oil, we import fuel, we have gas, and we do not have electricity. We have Fela, and we have Soyinka, but we also a flawed democracy and with all our improvements we remain a fragile state.

Let me end this way, about 90 million people - roughly half Nigeria's population - live in extreme poverty, according to estimates from the World Data Lab's Poverty Clock. Around June 2018, Nigeria overtook India, a country with seven times its population, at the bottom of the table. Put in another context, if poor Nigerians were a country it would be more populous than Germany. Almost six people in Nigeria fall into this trap every minute.. And with these stats come enormous risk, Devils are in the neighborhood and if we don't do something, the list of dangerous place is beckoning on us—Only time will tell