Business Lessons to Learn from the Ancient Warrior named Hannibal 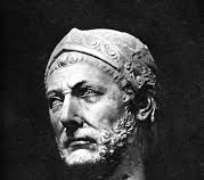 Hannibal was the head of the army of Carthage, and was therefore never a businessman but there are hundreds of *business lessons* and *leadership lessons* that can be learnt from the exploits of Hannibal

2. *You are never too young (or too old) to try*
_Hannibal crossed to Rome (which was the world power then) with his ragtag army at 26 years old._

3. *Your background is not a criterion for success*

_Hannibal was an African, yet he defeated hundreds of thousands of professional Roman soldiers with his ragtag African soldiers consisting of fishermen, farmers, and hunters._

This means that your background never determines your potential

4. *Expect initial setback mostly at the beginning of your business endeavours*

_When Hannibal reached Rome, Roman soldiers were waiting for him to slaughter him and his soldiers._

5. *Do the unthinkable*
_Immediately he discovered that Roman soldiers were waiting for him to destroy him and his army (and he was not ready for battle at that material time), he fled into the swamps and crossed the Alp Mountains to temporarily avoid the Romans - an act which looked ridiculous and even suicidal to the Romans._

Don't be predictable in some of your business moves, be dynamic and flexible like dollar multibillionaires Dangote, Branson, Trump, and Buffet

6. *Fight one enemy at a time, and make the enemies of your enemy your friend*

_Hannibal deliberately made friends with the Gauls, who were bitter enemies of the Romans._

7. *Learn all you can about your enemies*
_Hannibal usually had detailed information about the personality of each of the Roman military commanders sent to attack him._

Learn all you can about your business competitors and use their weaknesses against them (the problem with Nokia was that many of the bosses were just too self-deluded to think that Nokia will ever collapse under their noses, and this was the information its competitors used to practically destroy Nokia)

Don't ever pity the competition, annihilate all your business competitors if possible (Bill Gates did not pity any of his competitors, that's why he became the richest man in the world)

9. *Learn how to work with all types of people*
_Hannibal used the Gauls as part of his army to defeat Roman soldiers even though he (Hannibal) was a Carthiginian, used a certain Numidian tribe that fought wars only when naked, etc._

Successful businesses are built with all hands on deck, be they Christians, Muslims, Buddhists, Hindus, etc (Bill Gates employs all tribes, nationalities, and religions; little wonder why he became richest man in the world)

10. *Create something new*
_In the Battle of Cannae, Hannibal impossibly defeated 70,000 professional Roman soldiers (with his own 35,000 soldiers) by using the "double envelope" fighting method which he invented._

You can only succeed in business when you create something new or do something in a new way (WhatsApp changed the game in social media especially with its voice memo, video call, etc)

11. *Don't overstretch yourself*
_Hannibal never attacked any Roman town (he knew that attempting such would be tantamount to suicide) but always lured Roman soldiers into battlefield._

12. *Personal injury is not a handicap*
_Hannibal became blinded in one eye while crossing the swamps into Rome, yet defeated hundreds of thousands of Roman soldiers that had their two eyes intact._

13. *Leave an eternal footprint*
_Hannibal's military skills are still studied in all military schools all over the world till now (2200 years later)._

Leave an eternal footprint in your business moves (secondary school drop-out Jay Z made history as the first musician to make $1bn, and his method is already been studied officially)

14. *Make yourself to be up to the task*
_Hannibal spent 6 uninterrupted hours to kill 70,000 Roman soldiers at the Battle of Cannae._

Your business might become far more successful than you ever think, so prepare yourself for the task ahead (Jim Ovia was fully prepared from the onset to make Zenith Bank go global)

15. *Nobody is ever the best in a field*
_Hannibal (a common African) used superior skills to defeat the professional armies of a world power._