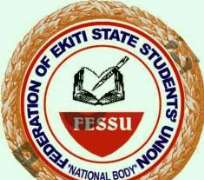 Federation of Ekiti State Students' Union (FESSU) is the umbrella body of all Ekiti State indigenous students in all higher institute of learning across Nigeria and beyond; a Union saddled with the responsibility of ensuring the utmost welfare of her members and preventing them from oppressive and intimidating actions.

You will recall the Union in her move for demanding justice and compensation on the death of two Ekiti Varsity Students, welfare of two of our members in critical health conditions, unconditional release of the detained students and investigation of officers of the Nigeria Police Force involved in the inhumane attack and sporadic shootings at students which occurred at Oye Ekiti on 10th September, 2019 made a release on 11th September, 2019.

It came to our notice that some top government officials paid a condolence visit to the families of the deceased yesterday after the outright condemnation of Governor Fayemi's silence on the pressing issue by our Union.

Our Union won't laud the visit of the State top government officials as we find such visit similar to shedding crocodile tears and solving issues from the surface not the source. The said visit which they made after the outright condemnation is that which we describe as a "ponmonic" visit as it still lack essential nutrients of compensation for the families of the deceased as we have earlier demanded from the State Government.

As we are not unaware of possible alibi that might be given by the State Government, it is important to state that such "ponmonic" visit won't be regarded as an emergency visit which must not have allowed the State Government made necessary decision on compensation as they had enough time to have decided such before the visit.

The Union employs this medium to expressly charge the State Government to as a matter of importance pronounce compensation for the families of the deceased, take responsibilities of the hospital bills of the two poor students in critical health conditions, ensure the unconditional release of the students in detention and ensure that justice is meted on the officers of the Nigeria Police Force who were involved in the attack that has brought about heated atmosphere in our dear State.

It is important to state that following the press release of the Union on 11th September, 2019, our Union's PRO was detained unlawfully for over 24hours by the Ekiti State Police Boss while one of the students arrested have been released on conditions while others are still detained and to be arraigned before a court next week.

It should be noted that the 48hours ultimatum given to our demands elapsed yesterday 13th September, 2019 and we remain determined to calling our members from various Local Governments of Ekiti State, Towns and villages in Ekiti, School chapters of our Union within and outside the state for mass display of displeasure since our demands are not met yet.

Yours in Ekiti State Students' Service,