Man beats wife to death for refusing to breastfeed baby 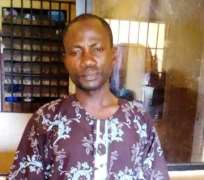 Men of Ogun State Police Command have arrested a 40-year-old man, Kingsley Madukwe for allegedly beating his wife, Glory Madukwe to death for refusing to breastfeed their 1-month-old baby.

The Nigerian Voice learnt that the suspects who hails from Ihiala in Anambra State is a commercial motorcycle operator residing in Ogun State with his late wife who was a mother of eight.

The arrest of the suspect followed a report by the traditional head of Egando in Atan-Ota community, Chief Rafiu Gbadamosi.

On the strength of the report, the DPO Atan Ota division, SP Salau Abiodun led his detectives to the scene where the suspect was promptly arrested.

The response of the woman angered her husband. The man was said to have slapped her and she slumped and died.

The spokesman of Osun State Police Command, Abimbola Oyeyemi said the remains of the deceased has been deposited at the mortuary at the General Hospital Ota for post mortem examination.

Oyeyemi said the Commissioner of Police, CP Bashir Makama has ordered the immediate transfer of the suspect to Homicide Section of the State Criminal Investigation and Intelligence Department for further investigation and prosecution.