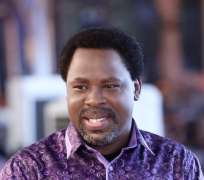 Exactly five years after the tragic collapse of a guesthouse at The Synagogue, Church Of All Nations (SCOAN), Pastor T.B. Joshua has honoured the ‘blessed memory’ of those who died in the incident with a thought-provoking message.


On September 12th2014, 115 people lost their lives in the horrific building collapse, 84 of them South African nationals visiting The SCOAN for religious reasons.

“A Christian does not consider death to be his end but the end of his trouble,”the cleric eulogised in a special broadcast on Emmanuel TV in commemoration of the anniversary.

Joshua stressed the inevitability of death, adding that a person’s age or the nature of their demise were not the critical issue. “What matters is the grace to continue living hereafter,”he said.

Waxing philosophical, Joshua asked viewers to be introspective as they remember the dark day.

“How are you spending your life,” he reflectively asked. “Because the greatest way to use life is to spend it on something that will outlive it – for instance, to love someone more dearly every day.”

Joshua called on his followers to proactively engage in helping others, stressing that “when you look around you”, you would assuredly find those “in need of your love, help, strength and time.”

He concluded with a sober reminder: “Live each day as if it were your last. Someday, you will be right.”

Despite the passing of five years, the controversy surrounding the cause of the deadly collapse remains, further induced by the attendant court case stuck in a seemingly endless legal quagmire.

The SCOAN still insists the church was ‘attacked’, pointing to a military plane which encircled the ill-fated building several times before its implosion.

The incident, however, has done little to quell the flow of foreign pilgrims to Joshua’s church with numbers from the Nigerian immigration service estimating six in every ten tourists to Nigeria are bound for The SCOAN.