Why we rejected Atiku's petition: Tribunal 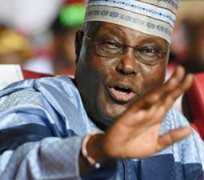 The Presidential Election Petition Tribunal on Wednesday rejected a bid by

the Peoples Democratic Party and its candidate Atiku Abubakar overturn the result of February’s presidential election, which saw Muhammadu Buhari returned to office.

The opposition said it would be appealing the judgement at the Supreme Court.

In Nigeria, post-presidential election litigations have become almost an.lacademkc exercise as they have hardly ever resulted in any major decisions like upturning or cancellation of the results, even most elections conducted in the country had fallen short of accept level of integity

The tribunal sitting in Abuja, Wednesday, September 11, dismissed the petition in its entirety.

The tribunal rejected all three of Atiku’s claims: that the election was marred by irregularities, that he received more votes than Buhari and that the president did not have a secondary school certificate, a basic requirement to contest the election.

“This petition is hereby dismissed in its entirety,” Justice Mohammed Lawal Garba said in announcing the ruling. All five judges who presided over the tribunal rejected Atiku’s claims.

Atiku rejected the result hours after Buhari was declared the victor and said he would mount a legal challenge.

Before the final ruling, Justice Garba had ruled that President Muhammadu Buhari was eminently qualified to contest for the February 23 presidential election. The court said evidence presented by the petitioners even showed that Buhari has a West African School Certificate and possesses more academic qualifications that made him even over qualified to contest the election.

The court also held that as against the petitioners' claim, there is not iota of falsehood in the affidavit of personal information submitted to INEC by Buhari before the election.

The tribunal also declared that there is no evidence that the Independent National Electoral Commission, INEC, transmitted the results of the last presidential election electronically to any server.

“I have carefully examined and examined Exhibit 28 (INEC Manual for Election) tendered by the petitioners, I did not see where there is provision for electronic transmission of result of election,” Garba said.

In the course of the ruling, the tribunal struck out the evidence given by David Njorga, Kenyan Information and Communication Technology, ICT, expert, invited as the 59th petitioners' witnesses to establish the claim that INEC transmitted results to a server during the election. The court, therefore, classified the evidence by Njorga as hearsay because he claimed to have sourced the information about the supposed INEC server from a third party website: www.factsdontlieng.com.

Justice Garba said the court cannot rely on such unbelievable evidence as presented by Njorga to hold that there actually exists a server. The judge also dismissed the evidence by the petitioners' witness number 60 (Gbenga Joseph) who claimed to be a statistician.

He noted that Joseph admitted during cross-examination that he has no professional certification. Justice Garba said the evidence by both witnesses, who the petitioners described as their expert witnesses, did not qualify as such.

The court also struck out the argument by the APC that Abubakar was not qualified to contest the election because he is alleged not to be a Nigerian by birth. It said that its power does not include determining the qualification of a petitioner in an election dispute.

It said its powers was to determine whether a person elected to the office of the President was validly elected and not to query the qualification of the petitioners to have contested the election, whose outcome was being queried. The court said the APC ought to have filed a cross-petition if it sought to challenge the qualification of the first petitioner to have contested the election.

In its ruling, the court said the non-joinder of persons against whom grievous criminal allegations were made in the petition, including Osinbajo, is a denial of their rights to fair hearing.

However, Justice Garba struck out the witness statement by Osita Chidoka, former minister of aviation, in support of the petition by Abubakar and the PDP. The court said the statement was incompetent, having been filed in violation of the provision of the Electoral Act. The court also struck out some other documents and portions of some processes filed by the petitioners.

However, the PDP has completely rejected the judgement of the Presidential Election Petition Tribunal describing it as provocative, barefaced subversion of justice and direct assault on the integrity of our nation's justice system.

The party is particularly shocked that the tribunal failed to point to justice despite the flawless evidence laid before it, showing that President Buhari was not only unqualified to contest the election but also did not score the majority of valid votes at the polls.

“The PDP finds as bewildering that a court of law could validate a clear case of perjury and declaration of false information in a sworn affidavit, as firmly established against President Muhammadu Buhari, even in the face of incontrovertible evidence,” Kola Ologbondiyan, national publicity secretary of PDP said in a statement issued Wednesday, September 11.

The party is also rudely shocked that the court took over the roles of the respondents' lawyers who clearly abandoned their pleadings by refusing to call evidence in defense of the petition. The court raked up all manner of excuses to make up for the yawning gaps occasioned by the total absence of any evidence from the respondents, he said.

“Nigerians and the international community watched in utter disbelief when the tribunal ruled that one need not provide a copy or certified true copy of educational certificate such individual claimed to possess, contrary to established proof of claims of certification,” he said.

The party notes as strange that the court even went ahead to provide rationalizations in favour of President Buhari, even when all hard facts before it shows that he did not possess the claimed educational certificate and that the Army was not in possession of his WAEC certificate as claimed in the affidavit he deposed to in his Presidential nomination form.

The PDP also described as shocking that the court approved the flawed declaration of President Buhari as the winner of the election despite evidence to show the perpetration of illegalities, manipulations, alterations and subtraction of valid votes freely given to Atiku Abubakar by Nigerians.

“Indeed, the pervading melancholic atmosphere across our nation since the verdict is a direct indication that the judgement has not fulfilled the desires and expectations of Nigerians,” he said.

The PDP, however, encouraged Nigerians to remain calm and not to lose hope or surrender to despondency or self-help, as our lawyers are upbeat in obtaining justice at the Supreme Court.

“This is more so as the tribunal itself admitted that there are several errors in the judgement,”he said.

Every election result has been contested unsuccessfully since Nigeria returned to democracy in 1999, with the exception of the 2015 poll in which Goodluck Jonathan conceded defeat to Buhari.

On each of those occasions, the losing candidate took their case to the election tribunal and later appealed at the Supreme Court but were defeated.

The presidential election ran into problems with smart-card readers used to authenticate voters’ fingerprints, which delayed voting in some areas.

International observers did not dispute Buhari’s victory but said the conduct of the election was widely flawed.

The Rainbow News with agency reports