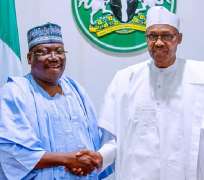 The President of the Senate, Ahmad Lawan, has congratulated President Muhammadu Buhari and the All Progressives Congress (APC) on the president’s resounding victory at the Presidential Election Petition Tribunal.

The Tribunal on Wednesday dismissed the petition by the Peoples Democratic Party and its candidate, Atiku Abubakar, in its entirety.

Lawan said, “The judgment of the tribunal has again put a judicial seal on the mandate freely given to the president by the Nigerian people in the February 23 presidential election.”

Lawan urged the President to accept the affirmation of his election as a reminder of the confidence of Nigerians in his capacity to continue to lead Nigeria towards its manifest destiny of greatness.

Lawan also commended the petitioners for using the judicial window prescribed by the Constitution of the Federal Republic of Nigeria in seeking redress for their grievances and urged them to join hands with the government and the Nigerian people in the important task of nation-building.