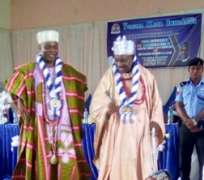 A sociocultural organization, Yoruba Koya Initiative has empowered some indigent women in Osun State with working tools to help their businesses.

The working tools include sewing machines for tailors and hairdryers for hairdressers were presented to the beneficiaries during the inauguration of Senator Ajayi Boroffice and Chief Olalekan Folorunsho as Patron and Alatunse of the group in Osogbo.

The President of Yoruba Koya Initiative, Mr Sunday Akinyemi said the group is committed to helping, supporting and defending Yoruba people and ensuring their wellbeing.

He used the avenue to advise President Muhammad Buhari to tighten the security in the and strength the nation’s economy.

Akinyemi said " the major objectives of Yoruba Koya Initiative is to defend the interest of Yoruba people. We are ready to work with security agencies to combat crimes stop insecurity in the country."

He urged the federal government to deal with the problem of proliferation of arms and curb the influx of bandits and kidnappers from neighbouring country.

President of Yoruba Koya Initiative commended the president for closing the border. He said the decision has further demonstrated his desire to secure the nation from insurgents.

He urged the President to take proactive measure on job creation so as to curtail unemployment among the youths.

" I want to use this opportunity to advice our President on the need to tighten the security in all the borders in a bid to tackling the prevailing insurgency and also boost the nation’s economic activities.

"There is need for our Government to tighten the security in all the borders so as not curb the importation of ammunitions into this country.

"Government should give priority to youth empowerment, empowerment of farmers and make sure they monitor the empowerment programmes so as to accomplish the desired goal.

The Seriki Fulani in Osun state, Alhaji Adamu-Mina Yahaya who spoke on behalf of the Hausa and Fulani in the state said there was need for more collective efforts to deal with insecurity in every nook and cranny of the country.

A revered traditional ruler in the state, the Olowu of Owukuta, Oba Hammeed Oyelude Makama commended Yoruba Koya Initiative for striving to make life better for the people.