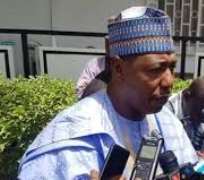 Governor Babagana Umara Zulum of Borno state has reaffirmed his determination and commitment to improve the welfare package of all NYSC corps members deployed to Borno state for their national youth service.

The governor made the affirmation yesterday at the passing out parade of 2019 Batch ‘B’ Stream (1) corps members deployed to the state who held their 3 weeks orientation camp at the Government Science Secondary School, Batagarawa in Batagarawa Local Government Area of Katsina State.

Zulum who was represented by the Chairman, Borno State NYSC Governing Board, Dr. Barka Sambo sad, "My administration will make sure we sustain and enhance the welfare package being given to all corps members serving in the state.

"I will also direct all the state MDAs to give you a rousing welcome and fully integrate you into their midst so that you can achieve your optimal best,” Zulum said.

He added that the NYSC has in response to the realities to the present day unemployment problem, introduced the skill acquisition and entrepreneurship development (SAED) program for the corps members on camp.

According to him, this is a welcome development, to equip the corps members with skills, to make them engage in profitable ventures even during service year.

He said:” The diverse knowledge and skills you acquired in the last three weeks will certainly prove useful in your service year. I therefore implore you to explore every opportunity that comes your way through conscious interaction with your host communities.

"In view of the immense benefit of the programme, my administration is looking forward to give you adequate support and encouragement", Zulum said.

And at a period when 657 out of the 844 corps members deployed to Borno state relocated to other states with only 187 left to serve in the state.

He described National youth service Scheme as a turning point in the lives of corps members which represents an important stage in their journey to a productive and fulfilling career.

Earlier in his address, Alhaji Rabiu Aminu , Borno State Coordinator of NYSC, appreciated Governor Zulum for honouring the closing ceremony despite his tight schedules, noting that, honouring the invitation itself attested to the goodwill and support NYSC enjoys from the state government, agencies and the good people of Borno state.