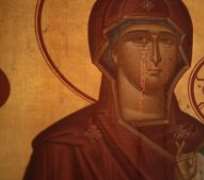 Some worshippers at a historic Chicago church said they witnessed a miracle after they saw an icon of the Virgin Mary weeping.

On Monday, there was a steady flow of believers from the city and suburbs at the Holy Trinity Greek Orthodox Church in Chicago as word spread of what many believe is a portrait of a weeping Mother Mary.

It was a custodian who first brought attention to what the faithful say is the Virgin Mary holding an infant Jesus with tears flowing down her cheek.

The sighting comes as the church faces foreclosure, possibly as soon as Thursday.

Holy Trinity was able to avoid foreclosure last year after a generous anonymous donation but issues with the donation are putting the church in jeopardy again.

On Sunday, believers celebrated the birth of Theotokos, the mother of God in the Greek Orthodox Church.

Many worshippers are praying for the church to say open.