I Repent For Criticising Tb Joshua, Other Ministers  – Reno Omokri 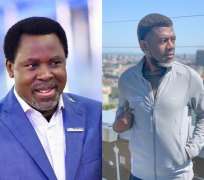 A few days after declaring he wanted nothing to do with T.B. Joshua or anyone associated with him, Reno Omokri has repented for his words and vowed to “no longer publicly criticise a minister or church”.

Omokri, an adviser to former Nigerian President Goodluck Jonathan and frontline critic of Muhammadu Buhari’s administration, made the admission on his multiple social media accounts.

“An imperfect church is better than not going to church. Based on my introspection, I will no longer publicly criticise a minister or church that I have access to privately. In fact, I should never have done that,” Omokri wrote.

“Love is greater than judgment. Judgment is for God and not Reno Omokri... I was wrong. I sinned. I repent,” he continued.

Omokri faced backlash last week after responding to a question by one of his followers about the legitimacy of prominent Nigerian Pastor TB Joshua.

His new statement marks a reversal to his policy of posting often-controversial social media messages targeting church doctrines or ministers.

Omokri, who also claims he is a pastor, equally made headlines months earlier for sensationally claiming Jesus was not actually God.