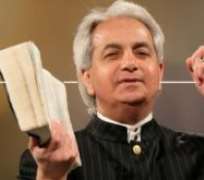 GRAPEVINE, Texas — In an interview following his public announcement that he has renounced common televangelist practices asking viewers to sow a financial seed to receive favor and blessings from God, Benny Hinn reiterated on Friday that he now views such teaching as gimmickery that is harmful to the gospel.

As some were concerned that a video asking viewers to “sow a seed for debt elimination” was posted two days after his announcement, Hinn also recorded a short explanation outlining that the footage was old, that it had been posted in error, and has consequently been removed.

ADVERTISING
Hinn was interviewed on Friday by Steven Strang, the founder of Charisma Magazine, to further discuss the announcement he made during his weekly broadcast, which aired on his Facebook page live.

When Strang opened the interview by asserting and asking about the “biblical basis” for the “prosperity gospel” — noting that Oral Roberts would have taught it, but that it has been “abused” — Hinn rather deflected and focused on his change of heart. He said that at 67, he has been thinking about how he will finish the race and the legacy he will leave.

While not being specific, Hinn said that his views have changed about a number of things. He outlined that his about-face on seed faith teaching is not because of what anyone has said but rather the work he believes God is doing in his heart.

Connect with Christian News
He recalled that two years ago, he began to be bothered by what he witnessed and realized the damage that it can do to others' faith.

“It's manipulation. It's gimmickery,” Hinn remarked. “To tell someone, 'You give a thousand; you're going to get a hundred fold' — what if they don't get a hundred fold? And most do not. What happens to their walk with the Lord and their faith? Think about that: the damage, the questions.”

Hinn said he did not want to be a part of that ever again, later noting that a man told him that he was donating just to see if the financial retribution would indeed happen. He outlined that he still believes that blessings are biblical, but such has been turned into selfishness.

“The focus must be Him [and] the gospel, not our greed,” Hinn exhorted. “Not what we want back for it. Not giving so I can get it back 100 fold and all that stuff.”

He stated that he is also aware that a number of young leaders look up to him and he doesn't want them believing in prosperity gimmicks.

“[F]or the sake of the next generation and the legacy of the gospel, I'm glad to be making these statements. I have to because I want to make sure the future generations hear the heart of this message that has been, I think, taken to the extreme by some people,” Hinn advised.

He said that the reason people should give is simply “loving Jesus, the gospel [and] loving the lost,” and God will bless them for doing so.

Hinn also explained, as he did on Monday, that he recently corrected someone for preaching such a message and they were receptive to his words.

He explained that he has increased his Bible reading and is in the Scriptures day and night, rarely ever turning on his television.

A video interview with David Diga Hernandez was also posted online on Saturday, as Hinn reiterated that he did not want to be known for preaching on prosperity. He also denied rumors that he is worth 40 or 60 million or that he still flies private jets.

“My call is an evangelist,” he said. “God called me to win the lost, to preach the gospel, to pray for the sick, the introduce the power of the Holy Spirit. … I want to make sure that the next 15 or 20 years of my life — that my message is the cross. The real call on my life.”

Hernandez asked Hinn directly if he believes God wants all believers to be wealthy, and he said that being blessed and being wealthy are two different things.

Hinn likewise posted a video to social media on Saturday in response to comments from those who doubted his conversion as a previous broadcast urging viewers to “sow a seed for debt elimination” had been posted to his page on Wednesday. He explained that the footage had been removed as it had been shared inadvertently and advised that old material still may be seen in various places online.

“But I do not want you to believe that I have changed my stand on prosperity as I declared it Monday night,” Hinn emphasized, pointing followers to his interview with Strang. He also agreed with Hernandez that it may take time before networks completely stop playing old broadcasts that are not reflective of his current beliefs.

As previously reported, on Monday night, Hinn — who has been one of the most known adherents of what is referred to disparagingly as the prosperity gospel, told viewers that he is concerned about churches that preach self and the flesh.

“It's about feel good, do good, make money — all the rest of it. And I'm sorry to say that prosperity has gone a little crazy, and I'm correcting my own theology and you need to all know it,” he announced.

Reaction to Hinn's stated transformation has been mixed, with some cheering the change, some being cautiously optimistic and others remaining skeptical. Some believe that Hinn should return money previously donated by followers and/or point to Hinn's other questionable practices, such as his faith healing methods that include causing those in his crusades to fall backward with the swoosh of his arm or jacket.