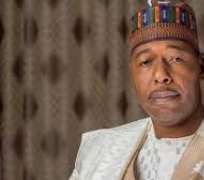 The former Secretary of the Defunct All Nigeria Peoples Party (ANPP) in Borno state, and Adviser to former Governor Kashim Shettima, Hon. Yusuf Adamu has commended Governor Babagana Umara Zulum and his Deputy, Alhaji Usman Umar Kadafur for their commitment which saw various developmental achievements in the education, health, infrastructures and poverty alleviation amongst the people within the period of 100 Days in office.

Adamu who was a member of the ruling All Progressives Congress (APC) Presidential Election Committee 2019, said the present administration in Borno state has achieved unprecedented records in security and socio-economic development, especially in the areas of reconstruction of public schools hitherto destroyed by insurgents, roads and drainage network construction and creating jobs which drastically reduced the rate of poverty amongst jobless youths in the state.

Adamu stated this in an interview with newsmen in Maiduguri on Sunday.

He said, Professor Babagana Umara Zulum has redefined the word "commitment" as a result of his demonstration of the people's will, adding that his Deputy, Alhaji Kadafur is being celebrated today haven proved bookmakers wrong in the drive to back Zulum in shaping Borno in the way the people had dreamed, hoped and prayed to have- a new Borno.

The APC Chieftain said "Professor Zukum, having come from a humble background, he understands how commitment can change the way and manner electorates rate good governance in public square, stressing that within just 100 Days, Zulum/Kadafur led administration were able to break the jinx of construction a befitting Local Government Secretariat in Biu town, in addition to numerous ongoing construction of schools/staff quarters in Marama, Sakwa, Kwajaffa, Sajeri, Abuja Talaka, Gajiram, Mafa, Monguno, Gubio, and host of other communities in the three senatorial Districts.

"This is a thing of pride not only for the feet achieved in the last 100 days, but for the acolytes he has been receiving from the good people of Borno state."

He specifically commended the present administration under the leadership of the Governor for taking his time to visit almost all the 27 Local Government Areas. All the places visited received massive construction and reconstruction of classroom blocks, staff quarters, perimeter fencing of public Primary and secondary schools, roads and drainage networks as well as prompt payment of civil servants entitlements among others.

He therefore called on the people of the state to rally round the present administration particularly in the area of security, as according to him, no society can develop in an atmosphere of violence, chaos or crisis, even as he appealed to the insurgents to lay down their arms and come back to the table with government for peace to reign.