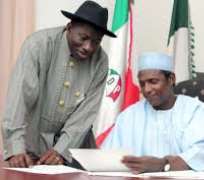 The spokesman of late President Umaru Yar’Adua, Olusegun Adeniyi, has described the claim by Process and Industrial Developments to have entered into a contract with Nigeria while his boss was alive as “Oyinbo (white man) 419.”

In Nigeria, 419 is the term used for fraudulent activities.

Adeniyi, who gave an insight into what could have transpired while his boss was alive, said all those who should know about the existence of such a contract during the Yar’Adua Administration have denied knowledge it existed in the first place.

A British court had entered judgment ion favour of the company over a gas contract with Nigeria.

Adeniyi wrote: “Even before I began receiving inquiries regarding the controversial $9.6 billion judgement that has become a Sword of Damocles over Nigeria, I was digging to find out what happened. Late President Umaru Musa Yar’Adua, under whose administration the said contract was signed, is not around to defend himself so I felt an obligation to know the extent of his involvement, if any.

“The first person I reached out to was Mr Tanimu Yakubu Kurfi, Yar’Adua’s Chief Economic Adviser and close confidant who also had the gas assignment.

“That he had no idea about this contract is very telling. The then Attorney General and Justice Minister, Mr Michael Kaase Aondoakaa, SAN, has also put it on record that he knew nothing about it. While I can confirm that it was never at the period discussed at the Federal Executive Council, I went further in my investigation.

“Those who served in the administration of the late Yar’Adua knew that when it came to contracts, one man had the last say: Engineer Emeka Ezeh, then Director General of the Bureau of Public Procurement.

“Without a Certificate of No Objection from the BPP, no contract would be awarded.

“Ezeh, one of the few officials in whom the late Yar’Adua had implicit confidence, told me on Tuesday that he only became aware of the contract when the scandal broke.

“He then proceeded to give me a copy of the BPP law and a relevant document which puts a serious question mark on the judgment.

“First, the law. Part 1V of the BPP Act 2007 deals with ‘Fundamental Principles of Procurement’. Section 16, subsection 3 states, ‘For all cases where the Bureau shall set a prior review threshold, the Bureau shall prescribe by regulation, guidelines and the conditions precedent to the award of Certificate of ‘No Objection’ under this Act’. And then subsection 4: ‘Subject to the prior review thresholds as may be set by the Bureau, any procurement purported to be awarded without a “Certificate of ‘No Objection’ to Contract Award” duly issued by the Bureau shall be null and void.’

“Now, the document. ‘The Approved Threshold’ given to the ‘Tenders Board and Accounting Officers (Permanent Secretaries and Chief Executive Officers) of all Ministries, Departments and Agencies (MDAs)’ were specific on the amounts that could be approved without recourse to BPP. Under ‘Special Works (NNPC)’, it is stated very clearly that any oil and gas contract that is worth $20 million and above must go to the Federal Executive Council (FEC) and secure the BPP Certificate of No Objection before approval.

“It is interesting that we still do not know the exact sum of this vexatious deal. Yet P&ID was reported to have spent approximately $40 million in pre-contract expenditures.

“The $9.6 billion Nigeria is expected to pay is made of a $6.59 billion profit the company claims it would have made over a life project of 20 years and the balance of $3 billion accumulated interest since 2012 when the judgement was given.

“It is interesting that it would take some ‘Oyinbo’ people to teach Nigerians the real meaning of ‘419’!

“According to their statement, ‘P&ID and the Nigerian Government entered into a 20-year Agreement – known as the Gas Supply and Processing Agreement (GSPA) – to refine natural gas for powering Nigeria’s electricity grid. The GSPA would have been very profitable for both P&ID and Nigeria and have generated an additional 2,000 megawatts of power for the national grid. Such a major increase in low-cost electricity supply brought by the P&ID project would have been transformative for millions of Nigerians.’”