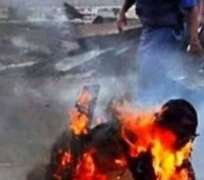 Socio-Economic Rights and Accountability Project (SERAP) has sent an open letter to Mrs Soyata Maiga, Chairperson of the African Commission on Human and Peoples’ Rights and the commission’s members requesting them: “to urgently submit a case on the escalating xenophobic attacks against Nigerians and other African citizens in South Africa to the African Court on Human and Peoples’ Rights and to seek an effective remedy and reparation for Nigerian victims.”

SERAP said: “these attacks constitute serious violations of the human rights of Nigerians and other African citizens in South Africa.”

The organization also urged the commission to “seek in the case to the African Court, punitive damages and adequate compensation of $10 billion (USD) on behalf of hundreds of Nigerian victims and their families. This amount will sufficiently take into account individual harm suffered by victims.”

In the open letter dated 6 September 2019 and signed by SERAP deputy director Kolawole Oluwadare, the organization said: “This is a key moment for the commission to push to protect the human rights of the victims. The commission ought to make it clear to the South African authorities that the victims of the heinous crimes have a right to an effective remedy and reparation, which includes restitution, compensation, rehabilitation, satisfaction and guarantees of non-repetition.”

The organization also said: “For the sake of the victims, the commission should move swiftly on the matter to prevent further harm to Nigerians and other foreign nationals in the country. Unlike for individuals and NGOs, the African Court Protocol does not require Nigeria to have made the declaration under Article 34(6) for the commission to submit a case on behalf of the Nigerian victims before the Court.”

The open letter read in part: “If the victims see that a process for ensuring adequate compensation for the crimes committed against them in South Africa is underway, it will also discourage revenge violence and killings and help break the cycle of violence that is now spiralling beyond control in the country.”

“If thecommission does not pursue a case for compensation for victims, the Nigeriangovernment may compel it to do so before the court. The call for an effective remedy and reparation for the victims of xenophobic attacks and violence is overwhelming, and comes from direct victims and their families, from the Nigerian government and the leadership of Nigeria’s National Assembly.”

“Pursuing the case before the African Court and seeking adequate compensation in the sum of $10 billion (USD) would help to ensure justice to the victims and deter South African authorities and high-ranking public officials who incite hatred, violence and discrimination.”

“Pushing for payment of $10 billion (USD) compensation for Nigerian victims of xenophobic attacks and violence can demonstrate that the days of impunity for these crimes are gone.”

“This would also ensure the effective implementation of the commission’s Resolution ACHPR/Res.131 (XXXXIII) and Resolution ACHPR/Res.304 (LVI) as well as its press statements of 2017 and 4 April 2019, which expressed grave concern over xenophobic attacks that took place in 2008, 2015, 2017 and 2019 respectively.”

“Every African citizen in South Africa is guaranteed the rights to life and human dignity no matter their nationality or migration status. The commission should call on high-ranking political leaders in South Africa to immediately end public statements, which amount to advocacy of hatred or incitement to discrimination, hostility or violence.”

“The commission should consider the xenophobic attacks as amounting to serious and widespread violations of human rights of Nigerians in South Africa. The lack of accountability and adequate compensation for the xenophobic attacks and violence committed against Nigerians in South Africa for many years has fostered a sense that there are no consequences for violence.”

“SERAP notes that the African Commission has condemned the xenophobic attacks and violence, noting that ‘the attacks not only constitute possible violations of the African Charter on Human and Peoples’ Rights but are also contrary to the principles and ideals of African solidarity cherished in the African Charter.’”

“SERAP is seriously that the African Commission, which is the main body mandated with promoting human and peoples’ rights on the continent—has so far failed to hold South African authorities to account for these crimes and to deter repeated violations and attacks against Nigerians.”

“South African authorities cannot expect Nigerian victims to resume their lives as though nothing happened. Time is of the essence as the failure and/or refusal by the authorities to respect the right of Nigerian victims to an effective remedy and reparation for the xenophobic attacks have continued to fuel repeated violence with devastating consequences and an entrenched culture of impunity of perpetrators.”

“Prior to the outbreak of the current xenophobic violence and attacks against Nigerians, the government of South Africa was failing to protect the human rights of foreign nationals in the country. Particular human rights concerns include restriction of the right to freedom of movement, violation of the right to life, equality, dignity and the security of their person and property as enshrined under Articles 3, 4, 5, 12 and 14 of the African Charter.”

“Significant efforts are needed to foster a culture of respect for the human rights of foreign nationals in the country. The commission should play a decisive role by beginning to call for broad human rights reforms that will ensure full protection and safety of Nigerians and other African citizens in South Africa.”

“The African Court has held that as long as the rights allegedly violated are protected by the African Charter or any other human rights instruments ratified by the State concerned, in this case South Africa, the Court will have jurisdiction over the matter if it is brought by the African Commission, pursuant to Articles, 2, 3(1) and 5(1) (a) of the Court’s protocol.”

“South African authorities have repeatedly failed and/or refused to take any meaningful action to end xenophobic violence and attacks against Nigerians, and address the root causes of these attacks. Also, the justice system has not satisfactorily dealt with the arrest and prosecution of perpetrators let alone ensure an effective remedy and reparation for victims.”

“The commission should also draw the attention of the Assembly of Heads of State and Government of the African Union to the xenophobic attacks and violence since they reveal the existence of a series of serious or massive violations of human and peoples' rights, as provided under Article 58 of the African Charter on Human and Peoples’ Rights.”

“It is important to invoke article 58 so that the AU can also consider taking punitive action against the South African authorities on their failure to implement their obligations under the Africa Charter and the AU Constitutive Act.”

“The impact of the violence and attacks on Nigerian women and children has been devastating, as children have been unable to attend school due to fear of attacks. Many Nigerians are now relocating their wives and children to Nigeria while they stay back to work in South Africa.”

“In February 2017, parents reported that xenophobic prejudice was being extended to local schools. For example, the Eastleigh Primary School in Edenvale, Gauteng threatened to refuse the children of foreign nationals access to education. In May 2008, more than 60 people were killed, more than 600 injured and over 20,000 people were displaced in the Gauteng and Western Cape Provinces.”