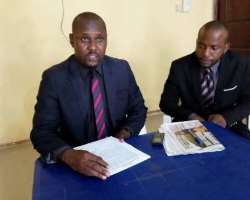 Two lawyers have sent Save Our Souls (SOS), message to the Federal Goverment (FG) and the International Community over alleged threats to their lives by the chairman designate of the Board of the Niger Delta Development Commission (NDDC), Dr. Pius Odubu, for daring to stand on his path.

The lawyers, Barr. Andrew Adaze Emwanta Esq and Barr. Ediri Amakata Esq had on 2nd of September, 2019, filled a legal action challenging the nomination of Dr. Odubu, as the would-be chairman of the NDDC Board.

In a suit No. FHC/ABJ/CS/1017/19, before the federal high court sitting in Abuja, has Dr. Odubu as the 7th defendant.

Briefing newsmen Saturday at the Nigeria Union of Journalists (NUJ), Delta state council press center, the duo said: "From the 2nd of February, 2019, when the suit was filled by us, as plaintiffs, Dr. Pius Odubu through his agents and associates have launched several attacks on the 1st plaintiff, Barr. Emwanta, including threats to his life, especially on the social media. These threats include declaring him an enemy of the Benin Monarch and an enemy of the entire Benin kingdom".

He disclosed that the threats on him in Benin custom and practice, have grave security implications, pointing out that though, his colleague, Barr. Amakata, have not been threatened, the threats would have a spill over on him sooner or later.

His words: "it is in the light of the foregoing we make this urgent "SOS" to the International Community, the Nigerian government and well-meaning Nigerians to come to our rescue. We do not take these open threats for granted because of the current security situation in the country, activated by xenophobia.

"This present threat to Barr. Emwanta, who is an illustrious son of Benin kingdom, is nothing short of "reserve xenophobia", with grave consequences.

They alleged that the activities of Dr. Odubu, in the campaigns in the 2016 governorship primarii in Edo state witnessed political crises.

Hear them: "We are not unmindful of the fact that Dr. Pius Odubu's campaigns in the build-up to the 2016 governorship primaries in Edo state recorded widespread political violence. Therefore, we are afraid that these positive threats to our lives may be made good, if nothing is done by the authorities, in calling Dr. Pius Odubu and his associates to order".

They charged him not to allow himself to stand as a threat to the rule of law following his law background and former federal lawmaker who jointly made the NDDC Act No. 6 of 2000, "particularly as the subject matter of their grievances, is already subjudice".

They warned that they would be forced to constitute a criminal case of crime against them if these threats continues, "If these attacks persists and Dr. Pius Odubu and his associates are not called to order by the authorities, we may be constrained to institute a criminal case of crime against humanity at the International Criminal Court at the Hague".

Fielding questions from journalists, Emwanta disclosed that Dr. Pius is pitching him against the Oba and the Benin kingdom, stressing that nobody could assume the place of the Oba to ostracize anyone.

He noted that the position of the NDDC Board chairman is for Delta state and not Edo's slot hence his call against Odubu's nomination.