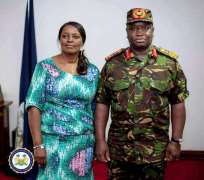 The binary approach to news media have often painted Africa in particular frames without any heterogeneity. Such frames of reference date back to colonial times when a particular agenda was being set. Analysing Africa, in its complexity, is historically known to lack nuance. Sensational news media often fall on Western tropes and report on the famine, war, AIDS, poverty and corruption. While these things exist, there is often a lack of clarity and balance in their reporting and analysis.

This lack of nuance was in full swing in the reportage of the State Chief of Protocol, Fatmata Kargbo story. African news platforms, including a Western one, all took to their respective platforms to report on the supposed “ousting” of a government official in association with a controversial testimony she had shared in a church, The Synagogue Church Of All Nations (SCOAN). The news seemed to celebrate and highlight the scrutiny she faced from her country’s corruption investigation agency.

African public discourse has bought into the stereotypical narrative of “African corruption” so much that as one YouTube commenter under the name bakemi1998 put it: “Is being corrupt the only avenue for civil servants [to] succeed?” The same commenter went further to state the following: “It’s ridiculous and unjust for that matter to associate every prosperous government employee with corruption.”

While the “African corruption” narrative is so pervasive in analytics, another element to Kargbo’s scrutiny is one of an inherently patriarchal society where male achievement is normalised whereas female achievement is viewed as an anomaly and as a result placed under a magnifying glass. The intersection of Kargbo’s story with religion adds another layer of complexity, particularly one that easily draws cynicism in the news media, particularly in an anti-religious social culture. Freedom of religion is an inherent right, and everyone has a right to attribute their success to whatever they choose. The immediate cynicism drawn by virtue of the fact that Kargbo made her testimony in a church is linked to what is often sarcastically referred to as the “prosperity gospel”.

However, the lack of nuance in analysing this is clear in this instance as well because linking this story to the so-called “prosperity gospel” would be an uninformed route. This is so because a glance at The SCOAN, and particularly its head T.B. Joshua reveals he is all about giving to the needy and showing compassion to the less privileged. The SCOAN’s charitable reach extends beyond the continent of Africa and surprisingly beyond the Christian faith: it reaches into faraway indigenous communities of Ecuador and Mexico; and connects with impoverished Muslim communities in the Northern parts of Nigeria. Therefore, “prosperity gospel” and The SCOAN many would argue are complete opposites.

There is need for introspection when it comes to journalists’ roles in informing the public. Many of the news reports and headlines on this story seemed to follow the clickbait route with a complete disregard for the public’s right to be accurately informed by insinuating that Kargbo had been sacked by the Sierra Leonean president when this is of course not true. Others suggested she had started to build her home in 2018 after her appointment to her current role as State Chief Of Protocol; whereas the woman had started building her house 14 years ago.

While corruption is a real issue on the African continent, as well as in non-African countries, it is uninformed and insolent to suggest that every African success story is related to corruption.

VIDEO OF TESTIMONY IN QUESTION -

Gareth Watson is a freelance journalist covering Sub Saharan Africa. He is based in Cape Town, South Africa.