South-West Group Chides IGP Over Security Summit. Says It Is A Charade 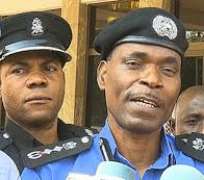 A coalition of self-determination groups in the South-West zone has described the security summit held in Ibadan by the Inspector General of Police (IGP), Mohammed Adamu, as a charade.

The coalition said this in a statement issued by its spokesperson, Mr Adeshina Akinpelu, and made available to newsmen on Friday in Ibadan. NAN reports that prominent in the coalition were factions of O’dua People’s Congress (OPC) and the Agbekoya Group. The group said that the way and manner the security summit was held showed that the IGP was not properly briefed about the real stakeholders as far as security was concerned in the zone.

“The IGP Muhammed Adamu that we know has been away serving his fatherland at INTERPOL for a very long time. He must have been misinformed that Gani Adams is the only person who ought to be invited to such a security summit. “The real stakeholders who ought to be in the summit were not invited. We have over 50 self-determination groups in the South-West who are currently tackling insecurity in their various domains. Also read: Security experts express mixed feelings over proposed South-West States security network formation “For instance, OPC has four factions namely Fredrick Faseun, Gani Adams, New Era and OPC Reformed.

Only Gani Adams was invited to the so-called security summit. “When you have a case like this at hand, it is either the IGP is not sincere with curbing insecurity in the zone or he was misinformed by some officers who had connived with Adams to make such security arrangements,” it said. The group wondered why the earlier security arrangement put in place by the South-West governors and to which all groups were invited was not allowed to take-off before the IGP entered into another partnership with Adams.

“There was already a security arrangement involving the South-West governors and all self-determination groups on how to protect our zone. Why can’t they wait for this to become operational before introducing this one? It said that as much as they would have loved to support the new security arrangement of the IGP in the zone, the involvement of Adams and Miyetti Allah showed it was a charade. The group also added that the failure of the police to fish out the killers of Mrs Olufunke Olakunrin and other Yoruba sons and daughters showed that the new security arrangement could not guarantee the desired security in the zone.

“We are aware that this current security arrangement by IGP Adamu was the handwork of some highly compromised Yoruba police officers and Gani Adams. “Adams has been doing everything within his power to frustrate the arrangements earlier put in place by the Development Agenda for Western Nigeria (DAWN) Commission for not allowing him to speak at the previous security summit held in Ibadan,” it said. Vanguard