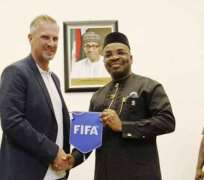 It is a rare feat for a leadership at any level to notch up such huge accomplishments into just One Hundred Days like Governor Udom Emmanuel has achieved for Akwa Ibom State between his swearing in, a little over three months ago on May 29 and today.

During his second term swearing in ceremony at the Nest of Champions, Uyo, Governor Emmanuel had announced that his 'completion agenda' would come with renewed focus on industrialization and will develop other new key areas of investments. Today, the governor has literally given Akwa Ibom State the wings to fly to the firmament of greatness in all sectors of the economy.

The Governor who is sitting invitingly in the cockpit of leadership has achieved a great feat for the State with the launch of Ibom Air, and subsequent commencement of commercial flights by the airline, the first in the history of Nigeria by a State government.

With the airline commencing full commercial activities on June 7, with routes Uyo -Abuja, Uyo - Lagos few months ago, passengers especially those in the inaugural flight, have remained thankful to the Governor for bringing such unprecedented development to the Akwa Ibom State aviation sector.

But the First One Hundred Days of Governor Udom Emmanuel is not just about the aviation industry. Evidently, the luggage for the State in the second term has something for every sector, with industrialization as the central plank in the plan of development of the State. His passion for a better State is yielding very attractive fruits to the State and for the world. The flour mill which is billed for commissioning by the Vice President, Professor Yemi Osinbajo is part of what makes this few days thick in the leadership of the State. Akwa Ibom State has taken off with the stunning proficiency of a visionary in the cockpit. A fresh beginning in the baker’s confectionery revolution beckons in Akwa Ibom with the King's Flour Mill which has commenced test production with a capacity of 500tons of wheat and 400 tons of flour a daily.

Another factory awaiting the scissors of the country’s Number Two citizen is the Plywood Industry, an initiative geared towards making Akwa Ibom a major producer of finished products for the building sector.

To optimize productivity at reduced capital for all the industries in the zone marked as the state’s industrial belt, Governor Udom Emmanuel's vision of steady power supply has further been boosted with the completion of the first phase of the 2x60KVA transmission substation in Ekim, Mkpat Enin local government area.

The power station executed in collaboration with the Transmission Company of Nigeria,TCN, currently has a 60MVA power transformer and three out going 33KV feeder bays with everything set for the official turning on of the station by Vice President Yemi Osinbajo.It is expected to dangle 48mw of power to at least five local government areas of Ikot Abasi, Mkpat Enin, Oruk Anam, Onna and Eastern Obolo.

In Akwa Ibom, the drive to completely overhaul and reposition healthcare facilities has continued with the re-equipped, digitized and remodeled 77 year old General Hospital, Oron. The hospital was commissioned on July 10, 2019 by Governor Emmanuel, while Immanuel General Hospital in Eket is also almost fully remodeled and equipped for commissioning. In infrastructure, the Governor has dropped a hint that President Muhammadu Buhari may likely visit the state in the next few months, to help commission some major federal roads constructed as dual carriageways by the state government. Some of the roads, which are at advanced stages of completion include the Uyo - Ikot Ekpene Road, the Etinan - Ndon Eyo Road as well as Uyo – Etinan and the Etinan - Eket Road which are constructed to international standards. Only recently, the government announced approval for recruitment of One Hundred Doctors and medical workers to boost the workforce in the state healthcare sector.

There is a strategic partnership of the Akwa Ibom State Government with security agencies aimed at sustaining the State as a safe haven for residents, investors and tourists.. This partnership has led to provision of logistic and other support to stem the tide against insecurity. Only few days ago, another batch of patrol vehicles were donated to the Akwa Ibom State Police Command among other initiatives of Government.

Another pacesetting action by the Governor is the convocation of the first ever education stakeholders summit in Uyo, with a charge for a change in the state's curriculum, infrastructural turnaround and introduction entrepreneurial studies in tertiary institutions.

Still, the Udom Emmanuel administration has not derailed from the policy of creatively diversifying the economy through agriculture which led to the acquisition of 100 hectares of land from each of the Thirty One Local Government Areas of the State for agricultural development, with the governor recently personally flagging off the second planting season in Akwa Ibom State. What is more? Youth and sports development continues to receive the energy and boost required to hatch stars in the State, and make Akwa Ibom the sports capital of Nigeria. This tree of passion continues to yield fruits in and out of season. Apart from being the home of the Super Eagles, from where they emerge the first African team to qualify for the last World Cup in Russia, FIFA in its recent visit to the state few weeks ago, nominated Akwa Ibom State as one of the centres for the 2020 Under 20 FIFA Women World Cup. Similarly, the state now has two football teams, Akwa United and Akwa Starlets, both competing in the elite division of the Nation’s football league.

The first One Hundred Days of Governor Udom Emmanuel is indeed a beauty to behold. Akwa Ibom State has never been this blessed! If these are just the dishes of a mere hundred days, then Akwa Ibomites are left to imagine what more to expect in the remaining 1,361 days of this administration.