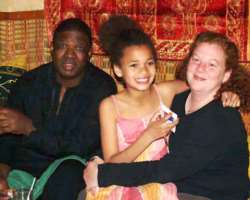 Former PMAN president, Mustapha Amego lives in the United States of America where he plies his trade in movie and music productions.
In this on-line interview, the burly musician fondly called the Funky Mallam by his fans back home in Nigeria who has produced several Nigerian movies, shares the effort he's making in the area of promoting Nigerian movies and music in America.

We hear you are now into movie production. What happened to your career in music?

So, what's the latest movie from your stable and how many Nigerian actors did you feature in it?

The latest movie I've just premiered is titled, “My American Nurse 2″. It was a Nigerian movie. I'm premiering another movie on July 10, which is also a Nigerian movie. My other works are for the National Geography or Discovery Channel.

Who introduced you to Nollywood?

Jim Iyke introduced me to the industry a couple of years ago and he also featured in several of my upcoming movies. The movie featured Ramsey Noah, Pascal Atuma and Hakeem Kazim.

What was the experience like working with the Nigerian movie stars?

You know how our people behave, especially when you've not worked with them before.

And how do Americans appreciate Nollywood?

Nollywood is one of the best things that has ever happened to Nigeria. In America, everybody talks about the industry and not about Nigerians. As regards Nigeria, they still perceive us as a country filled with fraudulent people.

When are we going to have access to your movies?

I've done a couple of movies that are yet to be released. I wrote, directed and co-produced as well as edited Ladies in the City, the last movie I shot with Desmond Elliot. And currently, I'm working on another movie that may soon hit the market.

I'm still negotiating with some marketers in Nigeria and I may likely visit home to finalise the business.

As soon as my schedules allow me

Did you sponsor the movies?

I sponsored some of my movies while I produced others in collaboration with my partners. I have a studio and that also means a lot of other movies come through me. I'm also an editor for the Discovery Channel here in America.

What did you study in the University?

I studied writing, directing and editing at the Georgetown University here in American. After my graduation, I taught film production at one of the World Media Centers for a while before returning to my studios.

And now that I have produced some Nigerian movies to my credit, I want to concentrate on helping out some of my producers back home, who are into movie and music productions. As long as the price is reasonable, we are good and we'd help them to market their movies here in America.

We don't want to go the way pirates are going about the business here. We want to do it legally.

And talking of music, what happened to your career?

My music is still on, only that I have set up a recording studio. I'm also trying to put an album together. I want to experiment with some traditional Nigerian musicians.

And have you produced any Nigerian musician in recent time?

Presently, most of the works I have produced are movie soundtracks and a few jobs that I have done for some Ethiopians. I haven't produced any Nigerian musician yet. Once in a while, I play with one of the biggest reggae musicians in the United States, Carl Malcolm…

You play in a reggae band now?

Yes and we have been on tour recently. I play the bass guitar. I'm becoming versatile and there's no instrument I cannot play skillfully.

The Nigerian music industry has changed since you travelled. Musicians now earn millions as endorsement and all that. And they drive some of the best cars and . . .

I heard about it. I'm happy this is happening in my lifetime. This was the reason I became PMAN president, so I could work out things that would benefit my fellow musicians.

How did you become a reggae musician?

The reggae thing was just an accident but it's holding on and good too. Carl was in a bend and needed a bass player for a gig. I aced his music in a blink and the rest as they say is history.