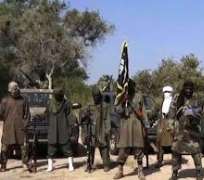 Gunmen suspected to be Boko Haram insurgents Thursday night around 9.39 pm ambushed the convoy of Governor Babagana Umara Zulum of Borno state few meters away from Konduga town of Konduga LGA of the state.

The governor was on his way to Maiduguri from the 4 days Borno South LGAs tour he carried out since Monday immediately on his return from Japan..

Military sources said that Zulum was returning from Askira/Uba, Gwoza and Bama Local Government Area tour when between Bama and Konduga his convoy was intercepted in an ambush by the Boko haram insurgents.

Military sources in the convoy told our correspondent in Maiduguri Thursday night that, "In fact we were only lucky that the governor, his commissioners and other vehicles in the convoy passed the black spot before the Boko haram started opening fire on us (convoy) . This made others to escape the attack unhurt but the last vehicles which is an army gun truck was pelted with bullets.

“But immediately they opened fire on us, our men in collaboration with the armed personnel from the Federal Special Anti Robbery Squad that were behind in the convoy responded immediately and first d back to silent the enemies (Boko haram).

"The whole thing looked like a kind of set up or ambush targeted at the security operatives in the convoy giving the governor cover (escort) through out his 4 days LGAs tour of Borno South.

"Because we started well and almost finishing well after going round all these places but just to return to Maiduguri from Bama this night (Thursday), they (boko haram) ambushed us before reaching Konduga. Thank God nobody was killed but few of us got injuries," military sources said.

It will be recalled that Governor Zulum had visited some Borno South LGAs like Shani, Bayo, Kwaya Kusar, Askira/Uba, Gwoza and Bama as part of his routine LGCs familiarization tour and people's needs assessment tour of the 27 LGAs of the state since his assumption of office in May 2019 to acquaint himself with the teething problems and challenges of the Borno people at the grassroots without any record of ambush or attack by the insurgents.

This attack is coming seven months after same attack on former Governor Kashim Shettima on his way to Gamboru Ngala in the night around same time 9 -10 pm when boko Haram insurgents suddenly opened fire sporadically at those vehicles left behind in the convoy trapped in sandy clay area mid way in the bush without any security vehicle around as the convoy cut into two from this middle.

Coincidentally, his successor, Zulum was attacked by the boko haram group on his way to Maiduguri from Bama town still in the night.