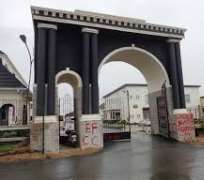 For the former Governor of Imo State, Rochas Okorocha, it is not just raining, it is pouring. It is like one day one trouble, and it couldn’t be worse.

The forfeited properties will be handed to the Imo State Government, and its people at the end of the day.

Making the disclosures today at a press briefing, the Head of the EFCC Enugu Zonal office, Usman Imam, disclosed that Prima Facie cases have been established against the three.

The properties which interim forfeiture have been ordered are worth billions of Naira.

They include, Imam revealed, a 16-block of 96 flats and, an eight- bungalow multi-million Naira Estate, a hotel, two schools, shopping plaza, supermarket, and four vehicles. A hospital was, also, forfeited (belongs to Paschal Obi).

The EFFC is also interested in knowing how the Rochas Foundation and other accomplices, acquired and/or converted some of the properties for personal use.

A case in point is the very large expanse of government land belonging to the Imo Broadcasting Corporation, IBC, which Okorocha took, and converted to that of his Foundation, where a school now situates.

Imam: “We hope to get permanent forfeiture orders on the properties in order to return them to the people of the state. All the facilities, including the schools will remain functional.

“The Commission would not like to shut them down for the sake of the students and other users.”

Aside from the EFCC action, the Imo State Government is, also, through the Property Recovery Committee it set up, recovering a number of government properties looted, allegedly, by Okorocha, in the twilight of his government.