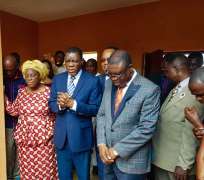 The Vice President Prof Yemi Osibanjo and Lagos State Governor, Mr Babajide Sanwo-Olu yesterday hailed the leadership of The Redeemed Christian Church of God during the graduation ceremony of 55 students (50 males and 5 females) who had undergone rehabilitation programmes from the Christ Against Drug Abuse Ministry (CADAM), Epe.

The Vice President and Governor who were represented at the graduation ceremony by Mrs. Yetunde Arobieke, Commissioner for Local Government and Community Affairs Lagos State could not but show her excitement about what she saw and promised to inform the parties she represented especially the Governor of Lagos about it and also called for a much needed partnership between CADAM and Lagos State Government, which she is willing to facilitate.

Speaking at the graduation ceremony which was attended by the leadership of RCCG, The Wife of General Overseer and Mother-In-Israel of The Redeemed Christian Church of God, Pastor Mrs Folu Aeboye in her remarks commended the management and staff of CADAM and as way to show her support donated a bus and a pickup van to the Ministry.

Pastor Ezekiel Odeyemi , the Coordinator of the center said CADAM is a faith-based initiative which cater to the treatment and rehabilitation of male and female drug addicts from across many nations of the world. Its services involves rehabilitation of different stages of drug and substance abuse and can be summarised in three levels, Preventive Care , Rehabilitation and After Care. She thanked the Vice President, The Governor, Wife of the General Overseers and all the leadership of RCCG for their time at the graduation ceremony and their continued prayers and support.