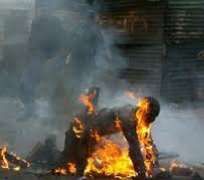 A prominent pro-democracy and civil Rights advocacy group- HUMAN RIGHTS WRITERS ASSOCIATION OF NIGERIA (HURIWA) has bemoaned the weak response by the Federal Government of Nigeria to the persistent bloody XENOPHOBIC violence targeting other Africans and Nigerians in South Africa by black South Africans just as the Rights group said the prevarication on whether to recall NIGERIA'S Ambassador from South Africa or not demonstrates the regrettable state of political leadership in Nigeria now.

HURIWA in a media Statement frowned at the seemingly lackadaisical attitudes of President Muhammadu Buhari who has not been forceful in reacting to the killings of Nigerians in South Africa just as the Rights group urged the President to wake up from slumber and take concrete, forceful and impactful actions against South Africa to put an end to the simmering insinuations that his administration has so far failed to act decisively because majority of those affected by the XENOPHOBIC violence in South Africa are Igbo whom he the President had stated never voted for him. HURIWA wondered why President Muhammadu Buhari has not been proactive to confront the South African government over these killings of Nigerians in South Africa just like the vigourous and result oriented way his government acted to save the Kano born young girl caught and sentenced to death in Saudi Arabia for trafficking in hard drug which President Muhammadu Buhari successfully obtained cemency and rapid freedom.

HURIWA said it was regrettable that the government is still just thinking of what to do when other smaller African nations have rolled out series of sanctions against the South African nation following the failure of the South African government to stop the incessant violent XENOPHOBIC crimes against other black Africans living in South Africa. HURIWA said the belated withdrawal by Nigeria from the forthcoming World Economic forum in South Africa was late in coming since even smaller African nations had acted much earlier than Nigeria. The group said it was laughable that Nigeria under the current dispensation is becoming a giant with clay foots.

In a media Statement by the National Coordinator Comrade Emmanuel Onwubiko and the National Media Affairs Director Miss Zainab Yusuf, HURIWA said thus: "The Human Rights Writers Association of Nigeria (HURIWA) is deeply appreciative of the swift response by some key players on Nigeria and around the world regarding the xenophobic killings of Nigerians in South Africa.

The concern that has been raised by Nigerians all over the world and Africans in the world especially Africans within the countries bordering South Africa are quiet impressive.

Some good aactions include the withdrawal of Nigerian music star Tiwa Savage from a proposed highly profitable show in SA shows that she is a remarkable patriot.

The action that were taken by some countries like DR Congo, Rwanda, Zambia and Zimbabwe in pulling out of the World Economic Forum in SA is visionary. It shows that, that is how committed statesman ought to behave in the face of such Cruel xenophobic attacks targeting their people.

We think that this may have instigated the delayed action of the Nigerian President Buhari in pulling out of the proposed world economic forum in SA.

So, The president of Nigeria must be brave enough to defend Nigerians in this dangerous times. Be that as it may, it is a good decision Nigeria has made if indeed is what the government has decided to do. It is also good if it is true that Nigeria has withdrawn her ambassador from south Africa, that is a very wonderful step but we feel that those steps are not far reaching enough if indeed they are factually accurate.

Government should go a step further by cutting off all diplomatic relationship with SA in a very clear term. Also Nigeria must insist that south Africa must pay to the last kobo for all the damages done to Nigerian businesses and Nigeria must also be ready to compensate SA businesses in Nigeria. The reason is because, the government of Nigeria was not forceful to take action against the South Africans. The ordinary Nigerians invaded South African businesses because they feel Nigerian government is weak.

Be that as it may, it is indeed Neccesarry that Nigeria government compensate SA businesses.

We condemn totally the actions of mob stars who invaded SA businesses in Nigeria because we do not repay evil with evil. In this vein, we condemn the killing of one of the protesters by the Nigerian police. The police man should be arrested and prosecuted for murder because the sanction for alleged looting is not death penalty.

The Extrajudicial killing by the police is unlawful. By the way there is no record of killings in south Africa by the police.

In other words, the Nigerian government must implement the foreign policy objectives that is Of necessity speak to the issues of protecting the sanctity of the Nigerian life globally also This shows that it is incumbent and obligatory on the part of Nigerian government to stop the killings by armed Fulani herdsmen and all sortt of hoodlums".