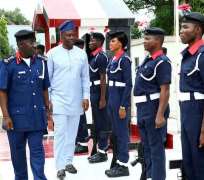 Governor Seyi Makinde of Oyo State has commended the Nigeria Security and Civil Defence Corps (NSCDC) over security measures taken to protect the farmers and herders in the country.

The governor gave this commendation while on a courtesy visit to the Commandant General NSCDC Abdullahi Gana Muhammadu in Abuja.

Makinde also solicited for additional deployment of two hundred and fifty Agro Rangers personnel to the state as support towards improving on the security situation in the State, he stated that; this deployment will further ensure the safety of the farmers who are the backbone of the state and south west in general to farm without fear.

The Governor noted the efforts by men of the Corps towards supporting the state government actualize its commitment to peaceful coexistence of the people, Gov. Makinde said more deployment of the Agro Rangers personnel to the state will further improve on the security situation in the state and encourage farmers to focus on their farming activities. In his response, the Commandant General congratulated the governor for his efforts in bringing peace to the state while promising that the Corps would continue to support the Oyo State peace initiative.

Accordingly, he said the Corps would sustain its Intelligence and Surveillance missions across Oyo State and surrounding States to deter any form of crisis.

He added that the establishment of Agro-Rangers initiative is to protect the farmers and herders in the country. Our mandate is to ensure security of lives and properties. This, we have been doing, and we won’t relent, Gana said.