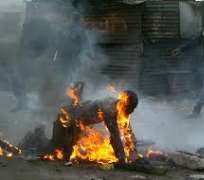 We have followed the unfolding lately in South Africa as it relates to the gruesome Xenophobic attack against Nigerians residing in South Africa. It is an act of monumental condemnation and we retain it so.

A spate of violence that broke out in suburbs south of Johannesburg’s city on Sunday which spreaded to the central business district on Monday, recorded the destruction of over 100 mainly foreign-owned shops and business premises. Cars and properties were destroyed and massive looting took place.

This recent attack occured ahead of the beginning of the African edition of the World Economic Forum in Cape Town on September 4 and before a state visit to South Africa by President Muhammadu Buhari of Nigeria, a country whose nationals have been affected, next month.

We have read, however not admitted, the continuous response of the South African government which is almost always relating to Investigation. Over 2000 Nigerians have been killed in South Africa and the government keeps up with assurance of proper investigation. An act which to us, is unanimously seen as one equivalent to mere diplomacy as a lure to rub some balm on momentary injuries.

Our concern stands as first being Nigerians who share close bound with our brothers in South Africa and further as Political party with National coloration.We call on South Africans and residents to uphold the human dignity of every person regardless of where they come from and to abhor all forms of violence and killing.

In like manner, we demand an unconditional intervention of the Nigeria government. The government can no longer choose to keep mum as this gruesome act has been continuous and it doesn't seem as there's an end to it soon.

The federal Government should carry out an overhaul of diplomatic relations with a view to protecting Nigerians abroad especially Nigerians domiciled in South Africa.