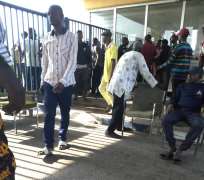 The charted security company guarding Premium Steel and Mines Limited (PSML), has allegedly locked up the gate of the company over claim of two months salary backlog.

The protesting workers locked up the gate for several hours on Thursday 28 August 2019, as their contract expires on 31 August 2019.

It was gathered that the security department shutdown operations for over three hours, forcing workers to be stranded outside.

However, the gate was opened at about 10:00am same day after negotiation was reached. Also, on September 2nd 2019, it was reliably gathered that the National Inland Waterways Authority (NIWA) locked up the gate of the company.

Although, the reason for the actions of the federal government agency for locking up the PSML gate is yet unclear.

Efforts made to reach the Deputy General Manager Corporate Affairs, Mr. Etaghene Emmanuel, for clarity was unsuccessful as several calls and text message sent to his mobile phone were not responded to.