We are interested in improving your welfare, equipment and encourage you to end the war.... Defense Minister tells Troops 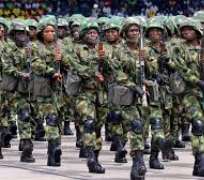 The Minister of Defense, Brigadier General Bashir Magashi(rtd.) immediately after receiving briefings from Theater Commander, GOCs and Sector Commandants of Operation Lafiya Dole, Monday told troops that he has seen their operational constraints and challenges that federal government will improve on but he was interested in improving the welfare, operational equipment of the troops and encourage them to finish the fight against boko haram insurgents and return to the barracks.

He added that his three days working visit to Borno state, the headquarters of Operation Lafiya Dole Theater Command has acquainted him with their problems and challenges, and particular attention will be given to their issues most especially their welfare packages.

Magashi who stated this Monday while addressing troops at the Maimalari cantonment parade ground Maiduguri Monday assured the troops that all their entitlements will be paid and improved.

"All what I want you to do is to do your job professionally. Conduct yourselves properly. I commend your efforts and sacrifices.

" I convey to you, the appreciation of Mr. President and we assure you we will continue to support you and cater for your welfare. We implore you to continue to do the good work you have been doing ", Magashi said.

He further assured the troops that all their needs will be adequately attended to including their salaries and allowances accordingly.

Speaking to the State Deputy Governor, Alhaji Usmàn Umar Kadafur later at the Government House Maiduguri, the Minister said he was in Maiduguri for the first time to assess and acquaint himself with the situation on ground with a view to address them.

He added that he was also in Borno to sensitize the officers and men of the Nigerian military, Borno elders and government, to see to the comfort of the troops and look at other areas of needs and attention.

He said," so far so good, we are able to sensitize them and all is well. Similarly, we are comfortable with the people of Borno state especially, the Borno Elders and state government for their support and understanding.

"I am only more disturbed with the issue of the IDPs and I am very very sure that very soon, they will return to their communities. The troops are doing very well. We appreciate them and they will end the boko haram insurgency soon.

" I was at the battlefield and have seen their constraints. I will convey to the President all their challenges. I assure you we will do our best. We appreciate them.

"We will very soon also ensure that the IDPs also returned to their villages and towns. I thank the Borno Elders and the people of Borno for their support to the military and other security agencies. I assure you the troops will do their best," the minister added.

Responding, the Deputy Governor, Alhaji Usmàn Kadafur congratulated the minister for his appointment by the President and welcomed him to Borno state.

He assured the minister that the state government will continue to partner with the military to end the insurgency while pledging never to relent in their efforts to give the security operatives full support and assistance to bring to an end the insurgency.

Kadafur also appreciated the efforts and sacrifices of the military in their counter insurgency fight and restoration of peace in the state.