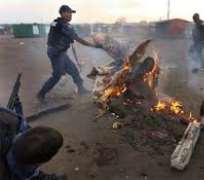 The Human Rights Writers Association of Nigeria strongly condemns the prolonged but currently ongoing violent xenophobic attacks specifically targeting Nigerians and Africans of other countries living and doing their businesses in South Africa.

We have watched just like millions of other Nigerians have also watched videos and photographic evidence detailing graphic and gory Treatments and violence meted out and are being unleashed on Nigerians and other Africans that are resident in South Africa who are not from South Africa. We are amazed, shocked, disappointed that the president of Nigeria and the government of Nigeria has watched helplessly as our citizens are being butchered in their hundreds in South Africa by black South Africans and government has so far refused to adopt and implement a stregent diplomatic blockade and measures against the South Africa business concerns in Nigeria, It is unfortunate. It is not enough to say Nigeria will take decisive action. We want those actions announced and implemented immediately.

Nigerians should take their future in their hands. We are calling on Nigerians to make up their minds and prepare within the next 78hrs to boycott DSTV multi choice, Nigerians should even boycott the Big Brother naija that is going on in South Africa. We are of the opinion that even the participants in Bbnaija should walk out of the Bbnaija Immediately.

We must take these measures and we must start doing that without any further waste of time because the government have not done anything to stop the South Africans from Killing Nigerians and these killings are still going on and everybody is just cool about it. Apart from the National Association of Nigerians Students NANs that have taken action, unusually you don't expect that from a group of such to be the one that will champion this advocacy. But NANS has demonstrated patriotism by protesting in front of south African business premises within Nigeria.

We Have to go a step further by boycotting any business that have to do with South Africa.

There is no justification for the xenophobic attacks against other African nationals who live in South Africa. South Africans do not have any right to use the excuse that certain Nigerians or some other Africans like Zimbabweans or other Africans who are in SA perpetrating crimes. 100% of Nigerians living in south Africa are not criminals, the criminals amongst the Nigerians populace in SA are less than 5% of the entire population of Nigerians living in SA. There are so many Nigerians that are academic professors, teachers, genuine investors who have deployed their human and material resources to carry out legitimate and profit oriented businesses to the South Africans economy. Most Nigerian own businesses have employed south Africans. Why are the south African citizens being allowed to kill Nigerians? And We are All watching as this Act Of genocide go on and the government of Nigeria is not concerned about the welfare and security of her citizens.

The Human Rights Writers Association of Nigeria is appealing to Nigerians to do something. We must do something, we must not say because our biological brothers and sisters are not in SA. There is hardly any local government in Nigeria that does not have somebody in SA, so we are all involved in this unfortunate scenario that is happening to our people in SA. We must all speak with one voice, we Must play the role of a giant of Africa. Unless we are now a giant we claim to be less. Are we really the giant of Africa? If yes we must take action, the government must show the way. We must not behave like the proverbial giant with clay legs.

The chairman of diaspora commission, Abike Dabiri-Erewa has failed. The ministry of foreign affairs has failed, since they have been unable to check the menace of targeted assassination and mass slaughter of our citizens in different parts of SA. This is very unfortunate.