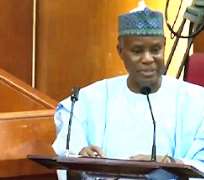 The Minister of Defense, Major General Bashir Magashi (rtd) has charged the Nigerian troops of Operation Lafiya Dole to be professional in their rules of engagement and end the Boko Haram insurgency that had claimed many lives and property.

Magashi dropped the charge Sunday in Gubio community when he visited troops in the Gubio Response Areas of Borno state which is located at about 85 kilometres north eastern part of Maiduguri, the state capital.

It will be recalled that Gubio town was however attacked twice last month, before the adoption of Army’s Super Camp on wheels fighting strategy.

The minister also urged the troops to be efficient, professional and loyal to successfully end terrorists’ activities in the northeast.

“You’re to carry out the Super Camp Operations on wheels with the utmost professionalism, efficiency and loyalty to succeed,” Magashi said.

He further noted that the loyalty of troops, was key to the success of ongoing operations secure the nation and its citizens.

“What we’ve now compared to 2015, is an indication that a lot has been achieved, by liberating 22 Local Government Areas in Borno state", Magashi said.

Commending the troops on achievements recorded against the boko haram insurgency, the minister assured that the government is committed to providing all the necessary support for officers and soldiers in front lines.

He said federal government was aware of troops’ efforts in combating the menace of Boko Haram insurgency in the northeast while o safety of troops and equipment, Magashi said: “I wish you a safe environment; I wish you successful operations so that in no distant time, we will end this menace.

“We will give you the best and we expect the best from you.”

The Theatre Commander, Operation Lafiya Dole, Maj-Gen. Olusegun Adeniyi has also assured that Maiduguri and other parts of the state would not fall to Boko Haram.

Adeniyi assured the Minister of an unflinching loyalty of troops to the Commander-in-Chief of the Armed Forces as guaranteed in the Constitution.

He promised that the troops under his command would carry the directive of the President towards ending terrorists’ activities in the region.

“We are ready, willing to implement the directive of the Commander-in-Chief. I want to dissociate the theatre command from cowardly information on social media. Maiduguri is not falling. Magumeri, Gubio is not falling and is not going to fall.

“The theatre command is in charge of the Northeast and we are going to continue to be strong", Adeniyi said.