Man, 37, kills self with sniper in Ikorodu, Lagos 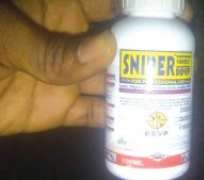 A statement from the spokesperson of the Lagos State police command, Bala Elkana, said on Friday, men of the Sagamu Road Police Station, Ikorodu, received a distress call that the deceased allegedly drank a poisonous substance suspected to be Sniper insecticide and died in his room at 7th Avenue, Rofo Estate, Odogunyan, Sagamu Road, Ikorodu.

Bala said homicide detectives visited the scene and the body was evacuated to the Ikorodu General Hospital mortuary for autopsy. An empty bottle of the poisonous substance and a suicide note were also recovered from the scene.

Meanwhile, Dr. Uchendu Onyedika, a neuropsychiatrist with the University of Abuja Teaching Hospital, has said though more women tend to attempt suicide, men are, however, more likely to succeed in ending their lives.

Onyedika, who said this in an interview with the News Agency of Nigeria (NAN) in Abuja on Saturday, defined suicide as an act of intentionally causing one's own death. According to him, men are more likely to end their lives because they are more decisive and they tend to complete whatever they decide to do.

He added that women, on the other hand, were more emotional and more likely to try to seek attention by attempting to kill themselves than actually being able to do so.

Onyedika noted that suicide is the 10th leading cause of death globally, with approximately 12 in 100,000 people deliberately ending their own lives.

According to him, most people who commit suicide have been experiencing depression for a while, adding that causes of depression vary from sudden tragic life events such as accidents, which often lead to physical disability.

He further listed other factors as loss of livelihood, loved ones, and jobs, as well as prolonged periods of hardship and diagnoses of chronic or terminal diseases.

Onyedika said though a significant number of people who often committed suicide might not necessarily have been depressed for a while, they could have suffered very disgraceful events of life and incurred shame and loss of their self-dignity.

He said: “For example, an act of infidelity to one's spouse uncovered and made public, especially when a lady is involved, or for persons with chronic medical illnesses such as seizure disorder, which often occurs in public.

“Also patients with mental illness who may have had a relapse in the open and only become aware of their environment after regaining consciousness.

“Another noteworthy cause of completed suicide is auditory hallucinations, which are voices of unseen persons, which sometimes instruct victims to go and kill themselves by various means. Some recorded acts of complete suicide and others of attempted suicide have been from victims' obedience to these unseen voices.”

Onyedika mentioned other factors that could predispose one to suicide to include substance misuses such as alcohol dependence, which had been linked to a higher risk of suicide and genetics. Onyedika listed other signs of suicidal persons as loss of interest in previously pleasurable activities and loss of appetite.

Also, sometimes a sudden change in mood for the better, “usually close to when the act of suicide is to be committed”.

The neuropsychiatrist said further that many victims of suicide had in one way or the other expressed their suicidal intents to their close friends, as well as on the social media, but was not taken seriously.

He said: “Comments like: 'he mentioned being tired of life a couple of times but I never took him seriously. Was there something I could have done? I should have seen it coming,' are common words expressed by close friends and relatives of victims after the attempted or completed suicide.

“We must know that most people do not want to die; they just want the pain of the moment to stop. If we observe there is a tendency to commit suicide by a person, we should commit to lovingly finding out the person's problems and offer advice or help to resolve the problems, we will save such persons from death.”