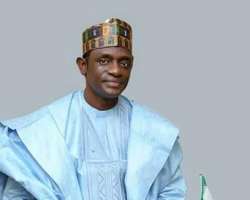 In an effort to provide tarred roads across the major cities in Yobe state, Governor Mai Mala Buni has flagged off the construction of township road in Buni yadi, the headquarters of Gujba local government.

Addressing a mammoth crowd Wednesday, Governor Buni said the project consists of 4 kilometre road with 8 kilometre concrete drainage at the cost of N673 million to be constructed through direct labour.

“Let me stress that today’s flagging-off ceremony of the township roads and drainages for which we are gathered here is in fulfillment of the promises made earlier. It is also intended to provide avenues of easing transportation and averting flooding in Buniyadi township.

“The construction work which we are gathered here to witness its flagging-off is to cover four kilometers of road and eight kilometers of concrete drainage. It is to be executed through direct labour by the state Ministry of Works, Transport and Energy at the sum of N673, 455,140.00,” he said.

Speaking earlier, the Permanent Secretary, Ministry of Works, Transport and Energy, Adamu Bako Mohammed said his ministry has the capacity to handle the project through direct labour and assuring the governor that they are committed to do the work that will withstand test of time.