Why Rivers People Are Happy With Gov Wike – Obuah 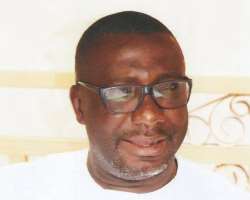 Overwhelmed by the chain of projects execution across the State by the Rivers State Governor, Nyesom Wike, the State Chairman of the Peoples Democratic Party (PDP), Bro. Felix Obuah has urged the governor to keep up the tempo as Rivers people are very happy with him.

Bro. Obuah, who made the remarks shortly after embarking on projects inspection with Governor Wike on Monday, said the State Chief Executive will remain dear in the hearts of Rivers people because of his humane disposition towards governance.

Describing the projects as unprecedented, Bro. Obuah said the quality of the projects would go a long way in enhancing the beauty and standard of living of the people.

While lauding the Governor for his efforts to revive all critical sectors of the State economy, Bro. Obuah said Rivers people would remain eternally grateful to Wike as he strives to take the State to another level.

He regretted that the State under Amaechi administration suffered severe calamity with decayed infrastructure dotting the entire State, and thanked Governor Wike for rising to the occasion to reverse the trend.

The PDP Chairman also expressed joy that the party and Rivers people are overwhelmed following Governor Wike's all-round achievements and style of governance and urged him not to relent or be distracted by those he called fault finders and enemies of progress.

“Governor Wike is ruling the State with the fear of God, and that explains why Rivers people are happy and will remain happy with him.

While still eulogizing the Governor on the landmark projects being executed across the state, the PDP Chairman said the move remains a milestone in the annals of the State and commended the Governor for prudent utilization of scarce resources.

Bro. Obuah called on the people of the State to remain supportive of the Governor, as according to him, it would be a good way to reciprocate Governor Wike's good works.

The State PDP boss who also joined Governor Wike to visit the site of the alleged demolition of mosque at Rainbow Town, Port Harcourt, condemned those peddling the rumour on the incident, describing them as agents of the devil.