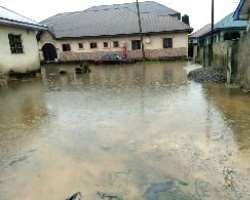 While the Delta state government and her functionaries are busy in a 'jamboree' like thanksgiving over a state created 28 years ago with little or nothing to show, her citizens are battling with the impact of flooding.

While some believed that the downpour on an auspicious occasion such as this, is a blessing but to the residents of the state capital and other affected arras, it is a curse. The heavy downpour prevented a good number of Deltans from attending the evening praise scheduled by the state government to hold at the event center by 7:00pm.

At the popular BYC Junction along Ibusa road, leading to Umuagu alter in Umuagu quarter and Ogbesowe quarter, residents and shop owners didn't find it funny with the rain that lasted over 30 minutes. Also, residents of Okpanam road are not left out of this nightmare called 'flood water' despite the much talked about storm water control system as their story is that of a man who lost his entire household to the ravaging Islamic extremist group called Boko Haram who are distabilizing the north east inspite of heavy military presence.

In Warri and Okpe, the story is not different as residents flee following the takeover of odumeh layout by flood in Jeddo near Redberet CTU, Police Road in Okpe local government area of the state.

Residents attributed the cause of the flood to the ongoing road construction which has blocked drainages in the area.

Meanwhile, journalists were today prevented from covering the thanksgiving service of the 28 years of the creation of the state. Security operatives stationed at the Anwai entrance of the government house did not allow reporters access as they claimed they were instructed and would not want to lose their jobs.

The security operatives were also furnished with the names of only seven media houses and their reporters to cover the event which was held at the government house chapel.

Efforts made by the unaccredited journalists to the Commissioner for Information, Mr. Charles Ehiedu Aniagwu and the Chief Press Secretary (CPS) to the state governor, Mr. Ifeajika Olisa, to gain access to cover the event met brick walls.