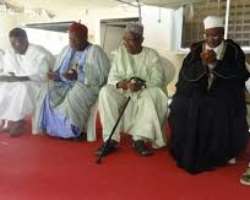 In an effort to get Borno people acquainted with the new counter insurgency operation adopted by the Operation Lafiya Dole, the Theater Commander Operation Lafiya Dole, Major General, Olusegun Adeniyi and other principal officers of the theatre held a consultative meeting in a closed door with the members of the Borno Elders Forum (BEF) to get them acquainted with the new concept of super camps and soldiers on the wheels operations.

Addressing the Forum, the theater Commander Operation Lafiya Dole, Major General. Olusegun.Adeniyi said "because of the importance we attached to the Borneo Elders Forum and your role in restoring peace back to the state I call you here to discussed and intimate you on our new concept of Operation".

" We just adopted the new concept of super camps and operation on wheels. Which when fully implemented, the days of Boko Haram insurgents are numbered . our doors are always opened to your suggestions and contributions ", Adeniyi sad.

Speaking on behalf of the Borno Elders Forum at the meeting, the former Borno state Governor, Alhaji Asheik Jarma said " we are here at your instance to discuss how best to work together to bing back peace to the state, Northeast and the country at large"

"Most of us are experienced and are above 80s. we don't have anything more than peace and we always pray for peace. We are always ready and available to work with the military through advise, suggestions or contributions. Whenever you need us we will always be available ".

While addressing journalists shortly after the Closed Door meeting, the Secretary of the Borno Elders Forum. Dr. Bulama Mali Gubio said the elders have discussed intensively with the theater commander and his principal officers and assured him of their support and commitment to work together with the military to end insurgency in the state.

" The Nigerian military are our children, and brothers. It is our duties as elders that we sit with our military. So that our wisdom, experienced and suggestions will be shared with them" Gubio said

"The Theatre Commander and his team have passion to end this crisis. The theater commander has opened the door for all and sundry to embrace peace including the Boko Haram insurgents", Bulamq said.

"People of Borno would rally round the military and give the military the support they deserved to see that this 10 year old insurgency is put behind us so that people can go back to their houses and pick up the pieces of their lives.

" As leaders we can speak to the leaders, we will continue to talk to our people, more especially our political leaders at the state and national assemblies, even the governor and minister to ensure that the military are given what they need to executive this war", Gubio said.