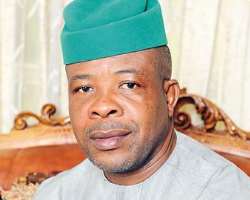 Andrew Nnanna arrived his office building in Orji-Owerri in Imo State promptly at eight am as was his habit. He needed only to park his car and use the stairs to the floor of the Estate Company where he works. He will be at his little office next to that of his boss Madam Julie, when she arrives, promptly at 8:15 as was her habit. As he parked his Toyata Camry in a parking space, he was surprised to see his boss SUV already parked . He was going to have to start coming in earlier, he thought; he couldn’t have Julie getting there before he did. There was something odd about the Toyota SUV, he realized. The interior lights of the SUV were on and unless he turn them off, Julie will soon have a dead battery. He gathered his small briefcase and a copy of Trumpeta Newspaper and struggled out of his car. He loves Trumpeta newspapers and never missed Kelechi Mejuobi’s column. He was hoping to read the story of the Imo State governor’s expansion of his private home in Owerri and in Mbaise and his building of a massive hotel in Owerri in just 90 days in office. Trumpeta didn’t carry the story, maybe because one of the editors is a friend to the governor of Imo State.

Henry S. Truman once said, “I never gave them hell. I just tell the truth and they think it’s hell” Malcom X also said “ to be nice in speaking the truth is hypocrisy” if our people would jettison this idea of reverence to people that do not merit it, our state would be better for it. Why we are always in political problems in Imo State is because the elites in the state are afraid of speaking out for fear of the political repercussions that might occasion by that. I do not always know how to pretend or hide my feelings when the issue of Imo state comes up. I will always be straight-forward in my writings and will always be on the side of the truth. I pick my pen when things go wrong. I hate anything that will retard the developmental growth of my state. As some would say, “there is a thin line between love and hate”. Your best friend maybe your enemy and your enemy may be your best friend. I understand all that. If a governor is providing the leadership that provides for good roads, water, health, education, jobs, security and other social amenities to the populace, it is only a sadist that would not support that government. This is what I have been fighting for in my writings and a candidate became governor to provide those basic facilities, why should I criticize just for the sake of it, or for the fun of it? If I see a good thing, I will acknowledge it, and if I see a bad thing, it would receive an opposite treatment.

Rt Hon Emeka Ihedioha took over governance in Imo in May 2019. The good people of Imo were in dilemma, looking for who would save them from the strangulation of 8 years of bad leadership orchestrated by Owelle Rochas Okorocha. At the end of voting in the governorship elections, in an election that was characterized and marked by large scale electoral fraud, Ihedioha was declared winner. But the results of the election bear no relationship with the reality of the peoples votes but that is by the way as electoral dispute issues are left for the tribunal and the courts . Ihedioha came in with a rebuild imo slogan. Rescue mission, Rebuild Imo , etc –all meaningless words and phrases that are irrelevant to the average Imolites on the street whose main concern is food, shelter, jobs and security. Immediate past Governor of Imo spent millions on propaganda selling the Rescue Mission. Ihedioha is doing same, trying to sell the Rebuild Imo mantra etc to Imolites. Imo people do not want words they want action. 90 days have passed since he took over and I tell you, it is 90 days of nothingness in Imo. 90 days of lies and blame games. Pension are still unpaid, workers are still receiving 70% of their monthly salaries with workers sacked on daily basis.

It is very shameful that Ihedioha took over power and immediately embarked on expansion of his house in Owerri, his house in Mbaise and his Hotel in Owerri. One of his online media handlers claimed the governor had to do renovations of his houses because his old homes cannot accommodate his visitors. Why then do we have a governor’s lodge? Government business should be done in government buildings and not in private residence. Government funds are now channeled to private residence while the lodge remains abandoned. The governor has also assigned projects for the 27 LGA’s in the State. He has mandated them to build 27 stadia for the state. The 27 stadia project is a fraud. They want to loot council funds with white elephant projects. Thieves!!! Robbers!!!!

I did not support Emeka Ihedioha during the governorship elections. I will always be around to say it as it is, though anyone can term what I say as constructive or destructive. To a people addicted to the tragic luxury of self-delusion, truth hurts badly. But then, truth always refuses to go away. It lingers around to perpetually taunt and haunt those that loathe and despise its face. Michelangelo once said to a young sculptor “don’t trouble yourself too much about the light on your statue, the light of the public square will test its value’’. Truth comes forth to speak for herself; finding no audience in the masses, she stands eternally, waiting to be recognized by the few. So it is with the truth of Socrates. Now, the truth we can never afford to deny today is that going from Rochas Okorocha to Emeka Ihedioha as governor of Imo is jumping from frying pan into a big fire. I said this in 2015, said it before the 2019 elections and I am saying it again.

Ihedioha is a belletician, a politician after his stomach alone. That is why you see him rush to rebuid his houses in Owerri, Mbaise and even building his hotel in just 90 days he took over power. That is what they do, beleticians. When such politicians occupy any sensitive position, they rake the public coffers at the sufferance of the people. They are ''belleticians'' because they have long throat. ''Belleticians'' are like cancer. They make the lives of the rest of us exceedingly miserable. By their corruption in public office, they are punishing the rest of us. Corruption does not show respect to the common good of citizens, thereby retarding development. Corruption by ''belleticians'' in all its manifestations is a dehumanizing evil force that must be fought with all the energy that we can muster. With Ihedioha, Imo emebiela!!

Kenneth Uwadi writes from Mmahu-Egbema, Imo State and can be reached via 08037982714