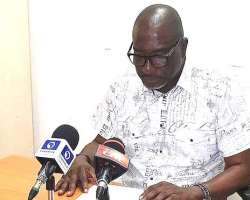 The Rivers State Chapter of the Peoples Democratic Party (PDP), is shocked to note that despite his baglog of experiences as a failed politician, Mr. Tonye Princewill, a former governorship aspirant of the All Progressives Congress, APC, is yet to learn from history.

Bro Felix Obuah, State chairman of the PDP made the observation through a statement by his Special Adviser on Media and Publicity, Jerry Needam in reaction to unsavoury political statements credited to Mr. Princewill in a recent interview with a section of the media which according to the State PDP boss were totally uncalled for.

The State PDP Chairman said the only thing discernible in that hocus-pocus interview by Mr. Tonye Princewill among all the unnecessary verbalism is a desperate effort to mend fences with his former political enemy, and now Transportation Minister, Chibuike Rotimi Amaechi who he (Princewill) never forgave for allegedly robbing him the APC governorship ticket in 2015.

Dismissing Mr. Tonye Princewill’s interview as a hodge-podge of praise-singing for recognition, self contradictions, insinuations and incitements, Bro. Obuah wondered how Chibuike Amaechi could be an extreme democrat as noted by Princewill and at the same being the cause of the APC’s loss of the 2019 election in Rivers State because of his numerous enemies both at the state and federal levels of their party, the Judiciary and the Independent National Electoral Commission (INEC) which according to the Kalabari born politician should serve as a lesson to Rotimi Amaechi.

“Also denying the imposition of Tonye Cole on the APC as the remote cause of the woes of the party in Rivers State, Tonye Princewill overtly enmeshed in self-adulation admitted being severally, a victim of the popular will unjustly reversed, indirectly referring to the encounter with Rotimi Amaechi, his extreme democrat in 2015”, the State PDP boss further noted.

The State PDP boss also regretted that Mr. Princewill also deluded by his desperation to warm himself back to his new ‘hero’, Rotimi Amaechi, threw caution to the winds by describing the Executive Governor of the State, Chief Barr. Nyesom Wike in the most derogatory terms and calling the election that brought him to office a sham and ‘INEC aided’, not minding the sub-judicial implications of his utterances.

Rather than living on political back-stabbing and mischief-making to climb to the top or gain prominence, Tonye Princewill, according to Bro. Felix Obuah should tap from the wisdom of Gov Wike and his other superiors and most significantly, do away with political harlotry that sacked him from the good books of his mentors like former Vice President Atiku Abubakar and Bola Tinubu among others.

“It’s only then he (Princewill) can be trusted by his kinsmen and by extension, the Rivers people before considering him for any elective or responsible position, the State PDP chairman advised.